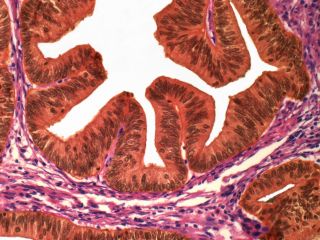 More women in the U.S. are developing and dying from uterine cancer than they were nearly two decades ago, and black women are "disproportionately" affected, a new report finds.

Uterine cancer is one of the few cancers in the U.S. for which incidence and death rates are on the rise, according to the report, published today (Dec. 6) by the Centers for Disease Control and Prevention (CDC). Live Science reported in July that death rates for liver cancer are also increasing, even as overall cancer death rates (meaning rates for all combined cancers) are falling.

What's more, the report found that black women were "approximately twice as likely to die from uterine cancer" compared with women in other racial and ethnic groups. One potential explanation for this disparity, the authors noted, is that the odds of surviving uterine cancer are higher when the disease is detected at an early stage, but black women were more likely than other women to be diagnosed at a later stage.

Overall, the rising rates of uterine cancer may be linked to rising rates of obesity among U.S. women, according to the report. Women with overweight or obesity are two to about four times more likely to develop endometrial cancer (the most common type of uterine cancer) than women with normal weight, according to the National Cancer Institute. Other factors that could contribute to the increase include insufficient physical activity, increasing rates of diabetes and the decreasing use of certain hormone therapies.

Because screening tests are not recommended for uterine cancer (a cancer test can spot the disease before symptoms start), the authors stressed the importance of increasing the awareness of early symptoms of this disease. One such symptom is abnormal vaginal bleeding, which occurs in approximately 90 percent of women who have this cancer, the report said. Indeed, if women experience this symptom, they should seek prompt medical attention.

The report is based on data from the CDC's National Program of Cancer Registries and the National Cancer Institute's Surveillance, Epidemiology and End Results program, both of which collect information on cancer incidence. The researchers also used data from the National Vital Statistics System, which contains death certificates from all 50 states and the District of Columbia.