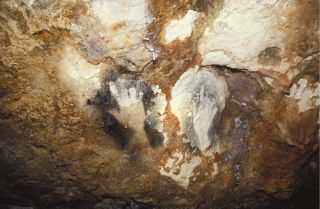 Hand images in Cosquer Cave in France show an odd pattern in which the fingers seem to get sequentially shorter.
(Image: © Fanny BROADCAST/Gamma-Rapho via Getty Images)

Europeans of the Upper Paleolithic era probably never imagined this: Some 27,000 years after those ancient Europeans' deaths, experts are arguing over whether these ancient people cut off their own fingers.

A subset of cave paintings found in Europe depict hands with missing fingers or parts of fingers. For decades, researchers have argued about what this means. Were the artists bending their fingers down to create the illusion of missing digits? Or were they actually missing fingers? And if they were, why? [In Photos: The World's Oldest Cave Art]

In a new paper, researchers argued that the amputations may have been real — and deliberate. But other scientists are not convinced, with one telling Live Science that the study is "ill-informed."

The mysterious hand images are found in caves in Spain and France, with most of the paintings dating to around 22,000 to 27,000 years ago. In some cases, the images were made by dipping a hand in paint and pressing it against the cave wall. In others, someone placed a hand on the wall and then blew paint around it, creating a negative image surrounded by a spattering of paint.

In most of the 40 European caves with handprint art, all fingers are present and accounted for, said Paul Pettitt, an archaeologist at Durham University who was not involved in the study and who described it as "ill-informed." The new research, published online Nov. 21 in the Journal of Paleolithic Archaeology, focused on seven sites with at least one hand that's missing fingers: Grotte de Gargas, Cosquer Cave, Tibiran Cave, La Grande Grotte and Margot cave in France, and Fuente del Trucho and Maltravieso in Spain.

Over the decades, researchers have suggested various explanations for these missing fingers. Ideas ranged from artists who'd lost fingers to frostbite to the deliberate folding of the fingers in some sort of sign language or finger-counting method. [Photos: 'Winged Monster' Rock Art in Black Dragon Canyon]

Brea McCauley, a master's student in archaeology at Simon Fraser University in British Columbia, became intrigued by the idea that the missing fingers represented actual amputations after learning about cases in more recent history involving deliberate finger amputation. She and her colleagues, including advisor Mark Collard, didn't expect to find many examples, McCauley told Live Science. To their surprise, a journey through old case reports and ethnographies turned up examples of deliberate digit amputation in 121 different cultures.

"It really became clear that this is a widespread practice, more so than anyone has discussed in the past," McCauley said. "It's on every continent."

The researchers found that the most-common reasons for cutting off one's own fingers were as a sacrifice or as a mark of mourning. One report from 1825 noted an elderly indigenous woman in South Africa who had removed a finger joint for each of three of her children upon their deaths.

In other cases, fingers were removed to mark someone as part of a particular group or profession, as in some Aboriginal groups in Australia that sliced off parts of the pinky finger to identify a child as a future fisherwoman. In a couple of cultures, partial finger amputation could accompany marriage. Fingers were sometimes sliced off as punishment or to obtain trophies during war.

Many of these practices were relatively rare or applied to only certain segments of society, McCauley and her colleagues wrote. The practices that best fit the cave evidence were amputation as self-sacrifice or as marks of mourning, the researchers wrote. Voluntary amputation would have sent a powerful message of belonging to a group, McCauley said.

"It is a symbol that you're always going to wear that shows, 'Look at this costly, painful, potentially harmful thing I've done to myself that shows how committed I am to us,'" she said.

However, these practices don't match up well with the missing fingers in the European cave art, Pettitt said.

"Ethnographically, if amputations occur, they are typically of the little finger: It would be idiotic to amputate more!" he wrote in an email to Live Science. The cave handprints don't show this pinky-centric pattern. In Cosquer cave, for example, some hand images show an ascending pattern that looks as if the artist extended his or her pointer finger and then bent the rest of the fingers naturally at the middle knuckles so that each finger looks sequentially shorter than the next.

The missing-finger hands are easy to replicate by bending one's fingers, University of Alaska Fairbanks archaeologist Dale Guthrie wrote in the book "The Nature of Paleolithic Art" (University of Chicago Press, 2006).

"Having played with making spatter stencils of my own hands, I find the ease with which one can replicate the 'maimed-hand look' has left me very convinced that all, or virtually all, were done in fun," Guthrie wrote, "especially when we recall that these are largely young people's hands and appreciate the quick, almost careless, casualness with which they were made."

McCauley acknowledged that the new ethnographies were unlikely to settle the debate; rather, she said, this study simply suggests that researchers shouldn't dismiss the possibility that the artists really were missing digits.