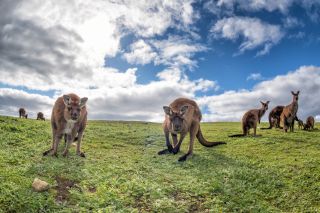 About 20,000 years ago, a group of aboriginal people gathered around a campfire and feasted on kangaroo meat, according to an excavation of a remote cave in Western Australia's Pilbara region.

Around the remains of the campfire, the archaeologists also uncovered stone tools that the Aborigines might have used to cut up the kangaroo barbecue.

"We'll have to have a look at them under the microscope, but they are the pieces that people were using in the site," Michael Slack, an archaeologist with Scarp Archaeology, told the Australian Broadcasting Corporation (ABC). [Photos: These Animals Used to Be Giant]

The site itself is being leased by BHP Billiton, a mining giant. But because of the area's history, the company had to survey the land in partnership with aboriginal traditional owners, the indigenous people of Australia. It's a good thing they did, because the survey party discovered the small cave in the Hamersley Range, a mountainous region of Pilbara.

The archaeologists were thrilled to find that the cave contained a treasure trove of artifacts, including ancient tools, kangaroo bone and the remnants of the campfire, which has nearly 8 inches (20 centimeters) of fine, white ash and pieces of charcoal in it that researchers plan to radiocarbon-date, Slack said.

"The guys have just uncovered an ancient campfire that, given the depth below the surface and the relationship with the stones around it, we think is potentially around 20,000 years old," Slack told ABC. "To make it even better, they found flake stone artefacts right next to the charcoal."

Based on the site's artifacts — including the presence of the campfire, tools and kangaroo bone — it's likely that a family of eight to 10 Aborigines used the cave for shelter every few years when they stopped by to work on their hunting tools, eat kangaroo and sit by the campfire, ABC reported.

The researchers noted that the artifacts date to the last ice age, known as the Pleistocene epoch, which lasted from about 2.6 million to about 11,700 years ago.