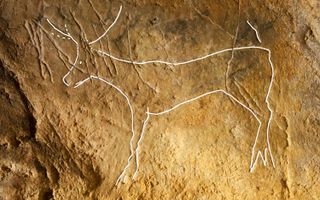 For urban graffiti artists, their work is sometimes on display all too briefly before rival artists cover it up. And ice age cave art suffered a similar fate, experts have discovered.

Archaeologists suspected that two caves called Grottes d'Agneux and located in eastern France might harbor artwork produced thousands of years ago by human artists. The researchers had strong suspicions that the art was there, but the cave walls were so covered with layers of more-recent graffiti (from the 16th to 19th centuries) that the ancient art had likely been hidden for hundreds of years, representatives of the University of Tübingen in Germany reported yesterday (Nov. 14) in a statement.

Scientists with the university and researchers from Spain recently used scanning technology to peer through the graffiti layers, reconstructing carved prehistoric images of a horse and a deer buried underneath. [In Photos: The World's Oldest Cave Art]

The graffiti covering the cave walls was mostly inscriptions of names and dates with a few figurative pictures, research team leader Harald Floss, a Tübingen University professor of early prehistory and quaternary ecology, told Live Science in an email. Because the caves are in a picturesque part of the countryside with spectacular views, many people have visited the location over time — and plenty of them left their mark in the cave, Floss said.

For 150 years, archaeologists have explored France's southern Burgundy region and found abundant remnants of Paleolithic culture — the earliest period of human cultural development. Because there are so many Paleolithic sites in this part of France, archaeologists have long thought that there must be cave art in the Saône-et-Loire district, according to Floss.

Painted or engraved caves are found "in nearly every dense palaeolithic region of Europe," Floss said. However, the deer and horse paintings are the district's first examples of cave art created by Paleolithic humans, university representatives said in the statement.

After scans revealed the figures, the scientists reconstructed the artwork with image-processing software. Then, the researchers used carbon-14 dating of charcoal in the cave and in the art to reveal the age of the paintings. Carbon-14, a carbon isotope, breaks down over time. By examining how much of the isotope in an object has decayed, scientists can calculate how old the object is; in this case, the art was found to be 12,000 years old.

The region in France where archaeologists discovered the cave art is significant, because it represents a zone where modern humans may have encountered Neanderthals. Evidence uncovered there could offer intriguing clues about human-Neanderthal interactions, Floss said.

Following the scientists' analysis of the carvings, French authorities inspected the caves and confirmed their archaeological significance for signs of early humans, according to the statement. The researchers said they're planning further investigations of the site.

The findings were published in August in the book "Palaeolithic Rock and Cave Art in Central Europe?" (Verlag Marie Leidorf, 2018).