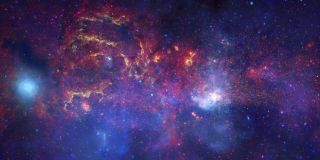 An image of the glowing heart of the Milky Way, where stellar nurseries and intense activity is shrouded in a cloud of dust. A mysterious signal from some of the dustier regions of our galaxy could be coming from spinning grains of microscopic dust, new research suggests.
(Image: © NASA/JPL-Caltech/ESA/CXC/STScI)

Scientists have detected a mysterious signal above the North Pole.

Though it's not clear exactly what's causing it, new research supports the idea that the signal may be coming from tiny, ultrafast-spinning grains of cosmic dust.

The strange North Pole signal, detected by a massive, all-sky survey, originates in some of the dustier corners of our galaxy and is part of a galaxy-wide signal that has puzzled scientists for decades. Because this mysterious emission can muddy signals coming from the faint afterglow from the Big Bang, understanding it better could ultimately help researchers get a better picture of the early universe.

In the late 1990s, astronomers looking at microwave radiation in the Milky Way saw an unusual signal. In between the typical emission from charged particles — free-free emission — and from spiraling cosmic rays — synchrotron radiation — was a faint signal that couldn’t quite be explained.  Was it an unaccounted part of these emissions or something else entirely? They called it anomalous microwave emission, or AME. Today scientists are still puzzling out its exact nature, but research published Oct. 27 in the preprint journal arXiv and submitted to the journal Monthly Notices of the Royal Astronomical Society is providing clues. [11 Fascinating Facts About Our Milky Way Galaxy]

"The new data from the C-Band All Sky Survey basically rules [synchrotron radiation and free-free emission] out quite strongly," CliveDickinson, an astrophysicist at the University of Manchester in England and lead author on the new paper, told Live Science.

The C-Band All Sky Survey, or C-BASS, aims to map the entire sky at a frequency of 5 gigahertz, using two telescopes located in California and South Africa. The new research focused on the north celestial pole region — the part of the sky directly over the North Pole. The scientists could eliminate the two most common sources of emissions by looking at lower frequencies than had been previously studied.

The leading theory, supported by this new research, proposes AME instead comes from tiny dust particles — only a few hundred atoms each. These nanoparticles are spinning at incredible rates due to interactions, such as collisions with, or drag from, other particles in the interstellar medium.

"I suspect [the emission] is coming from spinning nanoparticles, but at this point I'd say we're not  100 percent certain that that's the emission process," Bruce Draine, an astrophysicist at Princeton University who was not involved in the current research but has  studied AME in detail, told Live Science. "It might be some other unknown process involving unexpected emission from these dust grains."

Assuming AME does come from nanoparticles, scientists still don't know what they are made of. Polyaromatic hydrocarbons — organic compounds made from rings of carbon and hydrogen — seem to be a good candidate, but as yet, no strong evidence directly links them to regions where AME is seen. Some scientists believe one source of AME could be caused by dust made primarily of silicates or carbon. For instance, a study published in June in the journal Nature Astronomy found that AME signals from dust swirling around newborn stars was made of tiny, spinning nanodiamonds. However, no one knows if the nanodiamonds seen around objects like stars also cause the AME coming from dusty interstellar regions.

Ultimately, understanding the nature of AME may help answer bigger questions. The cosmic microwave background radiation (CMB) — light leftover from the Big Bang — is one of the most important ways to understand our early universe. AME can contaminate precise measurements of the CMB, so understanding its nature can help scientists disentangle its signal from the CMB.

"AME, in principle, is a new window into the interstellar medium," Dickinson said. "It has implications for star formation and planet formation."

Because scientists are still learning about AME from the ground, revealing its true identity may prove challenging. Either scientists will have to wait to find an unambiguous signal, which could be a long shot, or we may just have to fly out there with a cosmic dustpan and collect some particles ourselves.