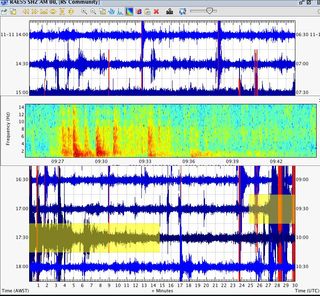 A seismic recording device on Mayotte was the first to detect the hum, though not the first one people noticed. Mark Tingay (@CriticalStress_) processed the data to create this image.
(Image: © Mark Tingay)

There was a hum that nobody could hear. It was a seismic event, one that originated off the coast of Mayotte on Nov. 11, a tiny island in the waters between Madagascar and Mozambique.

From there, it circled the entire world, though it was unusual enough (un-earthquake-ish enough) that almost no one noticed, as Maya Wei-Haas reported for National Geographic. A few people paid attention though, and that sparked a hunt for the source of the hum that, she reported, still hasn't been resolved.

The hum, National Geographic reported, was strange for a number of reasons. First, it rang at just a single ultra-low frequency, like a well-tuned bell. Seismic waves usually involve lots of different frequencies. Second, the wave emerged and circled the planet without the usual signs of an earthquake; no one in the area felt any shaking, and the "p-waves" and "s-waves" associated with the hum, the sort of waves that you actually feel during an earthquake, were so faint as to be nearly undetectable. And yet, a Nov. 12 report from the French government found that Mayotte had slid 2.4 inches (6 centimeters) to the east and 1.2 inches (3 cm) to the south. [The 10 Biggest Earthquakes in History]

Scientists have proposed a number of possible explanations for the strange seismic event near Mayotte, Wei-Haas reported. But none is yet anywhere near confirmed. Perhaps a "slow earthquake" struck the area, the sort that doesn't cause much intense shaking because it occurs over a much longer period of time. Perhaps a bubble of magma squeezed past below the surface, or sloshed around in a big hole in the crust in a way that interacted with the local geology to produce the resonant ringing. Researchers even speculated about a meteor strike, though that seems unlikely. For now, the exact cause remains a mystery.

For more on the unusual seismic event, read the full report at National Geographic