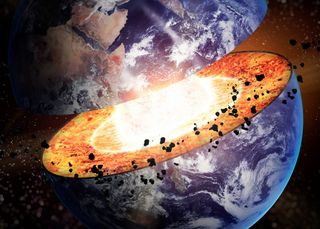 Mysterious blobs deep in the Earth's mantle could be minerals that precipitated out of an ancient magma ocean that formed in the collision that also created the moon.

These blobs, called ultralow velocity zones, are found very deep in the mantle, close to the Earth's core. They are known only because when seismic waves from earthquakes travel through them, the waves slow dramatically. This indicates that the blobs are somehow different from other parts of the mantle, but no one knows how.

Now, new research suggests that the blobs could be an iron oxide-rich mineral called magnesiowüstite. If so, their existence would hint at a former magma ocean that might have existed 4.5 billion years ago, when a huge chunk of space rock rammed into Earth, spun off the material that would become the moon, and possibly melted large portions of the planet. [In Photos: Watery Ocean Hidden Beneath Earth's Surface]

"If one can Identify that these patches do contain an amount of magnesiowüstite that would be an indication that there was a magma ocean and it crystallized in this fashion where the iron-rich oxide precipitated out and sank down to the base of the mantle," said study leader Jennifer Jackson, a professor of mineral physics at the California Institute of Technology.

The mantle is around 1,800 miles (2,900 kilometers) thick, and the ultralow velocity zones are less than a mile to up to 62 miles (100 km) thick and wide, Jackson told Live Science. They slow down seismic waves that travel through them from 30 to 50 percent.

Studying these weird blobs directly isn't possible, so Jackson and her colleagues had to mimic the pressures of the deep mantle right at Earth's surface. To find out if the mineral magnesiowüstite has the kind of properties seen in ultralow velocity zones, the researchers took a small sample of the mineral, put it in a pressure chamber and squeezed it hard with a pair of diamond anvils. The whole pressurized apparatus is small enough to fit in the palm of a hand.

"Sometimes I'll say that I'm carrying around the core-mantle boundary pressure in my pocket," Jackson said.

The researchers bombarded the sample with X-rays from different angles and then measured the energy of the X-rays as they exited the sample, looking for how interactions with the crystalline structure of the mineral changed them.

They found that high pressures change everything. At atmospheric pressure, Jackson said, waves exiting a magnesiowüstite sample are always the same, no matter what direction they travel through the crystal. [Photos: The World's Weirdest Geological Formations]

At core-mantle boundary pressures, though, the direction the waves travel matters a lot. There can be up to a 60 percent difference in the speed of a wave going through the crystal depending on how it passes through. A transverse wave traveling through the mineral moves at a little less than 1.8 miles per second (3 km/s) in one direction and a little more than 3.1 miles per second (5 km/s) in another, Jackson said.

What does this mean for the real mantle? Well, Jackson said, anisotropies have been observed down there, too. No one has really looked to see if ultralow velocity zones have them, but there's reason to think they might. If the cooling-magma-ocean theory is true and there is magnesiowüstite deep in the mantle, it could be pushed, squished and nudged into an anisotropic configuration by pieces of oceanic crust that have been pushed deep into the mantle in the process of subduction. (Subduction is when one piece of crust pushes below another and dives into the mantle, as happens along the coast of northwestern North America today.)

"If we can look for it, it would be really good evidence to suggest this interaction of ancient slab subduction and ultralow velocity zones that contain this iron-rich oxide," Jackson said.

Now, Jackson hopes to work with seismologists to see if seismic waves that enter ultralow velocity zones come out differently depending on the direction of travel. If they do, it will further bolster the magnesiowüstite hypothesis.

"The presence of this mineral, being shaped by the slab, could give us insight to Earth's magma ocean and its crystallization," Jackson said.

The researchers published their findings in May in the Journal of Geophysical Research: Solid Earth.

Editor's Note: This article has been updated to correct a statement about subduction.