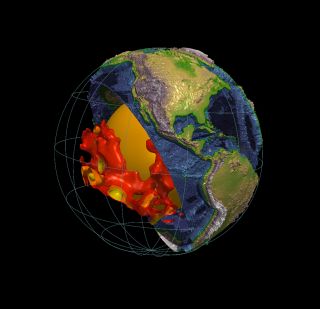 Two continent-size blobs of hot — and possibly molten — rock can be found deep underground, about halfway to the center of the Earth, according to a new study. These curious structures — each of which is so large that it would be 100 times taller than Mount Everest — could be made up of materials that may shed light on how the Earth formed, the researchers said.

One of the blobs is located beneath the Pacific Ocean, and the other can be found beneath the Atlantic. These underground structures start where the Earth's mantle meets the core, but they send "plumes" up through the rock like a Lava Lamp, the researchers said.

Scientists now think these masses differ from the surrounding rock in more than just temperature. They're also "compositionally distinct," meaning they could contain materials not typically found in the rest of the Earth's mantle. Yet even some of the most basic information about the blobs is still a mystery. [Photo Timeline: How the Earth Formed]

"To me, the big unanswered question is, what is it, and how did it form?" said the paper's lead author Edward Garnero, a professor in the School of Earth and Space Exploration at Arizona State University.

Scientists have observed the blobs for decades by monitoring seismic activity in the two regions. Different types of seismic waves travel at different speeds, depending on the type of rock the blobs are moving through. And by comparing the timing and delay of signals from multiple locations, seismologists can build models of what's going on in the Earth's interior.

Because they're big and characterized by the slower wave speeds, the blobs have been called large low velocity provinces (LLVPs). And when the speed of one type of wave, shear waves, is even slower than would be expected, scientists call the areas large low shear velocity provinces (LLSVPs). But beyond that, not much is known about the origin or composition of these strange rocky blobs.

"The LLSVPs are definitely there, but the terrible name they have been given reflects the fact that we don't really know what they are," Richard Carlson, a geochemist at the Carnegie Institution for Science in Washington, D.C., who wasn't involved with the new paper, wrote in an email to Live Science.

The Lava Lamp comparison is appropriate — except when this Lava Lamp blob reaches the top, it spills or explodes out of the Earth's surface, Garnero said.

If an especially large "superplume" of magma from one of these blobs were to make it to the surface, it would result in "massive eruptions where the lava will come out for millions of years at a time," Garnero said. There isn't much cause for alarm, though. "The next one could be on its way," he said, "but it could be a million years away."

Scientists aren't sure if the blobs are made of material from the Earth's crust or if the chemical difference dates back to the Earth's formation.

"If we understood these 'blobs' better, that would represent a huge step forward in understanding the deep workings of our planet," Wendy Mao, a geoscientist at Stanford University who was not involved with the new paper, wrote in an email to Live Science.

The new research was published online June 20 in the journal Nature Geoscience.