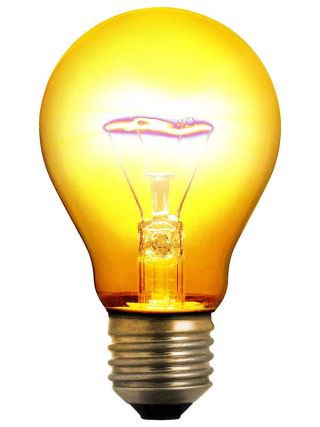 The concept that reaching an insight is much like shining a light into a dark place goes back to at least Plato. It was this philosophical analogy that actually led social psychologist Michael Slepian at Tufts University to wonder if light bulbs might actually spur insights.

"Insight has been studied for decades; it is still a very mysterious phenomenon," Slepian said.

The researchers first wanted to see if light bulbs actually were unconsciously linked to enlightenment in people's minds. In a preliminary experiment, 73 college students watched as words were flashed across a computer screen. They viewed 10 words associated with insight — such as create, conceive, and envision —10 other words and 20 non-words. They were then asked to respond as quickly and as accurately as possible if what they were shown was a word or non-word.

The students had either a bare, unshaded incandescent 25-Watt light bulb or an overhead fluorescent light turned on in the room. Volunteers exposed to the light bulb responded quicker to words linked to insight than other words, supporting the notion that light bulbs were indeed connected to insight in their minds.

"Our environment can influence our creativity," Slepian told LiveScience.

For instance, in the experiments:

"Our findings are not a result of the level or type of lighting, but are a function of exposure to the symbol of insight, the light bulb," Slepian explained.

These findings suggest that it takes more than light to promote enlightenment. Instead, the researchers suggest our brains respond favorably to bare lightbulbs because they are familiar symbols of insight. This kind of so-called "priming effect" has been seen before in psychology — for instance, when shown artifacts from the business world, such as briefcases, people play economic games more competitively, and exposure to the American flag triggers aggressive behavioral tendencies among regular news watchers, due perhaps to how the United States is often linked in the news to attacks both against and from other parties.

These findings could have practical applications in both schools and the workplace.

"Creativity is an important asset, and over and above individual differences in creativity, we find something as subtle as an illuminating light bulb in our environment can facilitate insight, and thus lead to more creative solutions to problems," Slepian said. "It would be fascinating to see if this works in the classroom or in the workplace."

These findings will be published in the July issue of the Journal of Experimental Social Psychology.