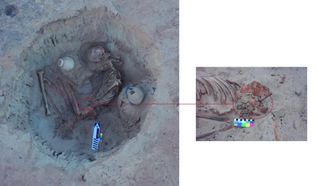 A jar and a reddish pot lay in the grave next to the woman's remains.
(Image: © Ministry of Antiquities)

Archaeologists in Egypt recently unearthed a grim discovery: the skeleton of a young woman dating to about 3,700 years ago who was in the final weeks of her pregnancy when she died.

And she was buried with the unborn fetus still inside her body.

The tiny skeleton was head-down within the woman's pelvis — a position typically seen in the third trimester — suggesting that she may have died following the onset of labor, officials with Egypt's Ministry of Antiquities said in a statement on Nov 14. [The 8 Most Grisly Archaeological Studies]

An international team of experts from Yale University and the University of Bologna in Italy found the remains. They uncovered the skeletons in a cemetery at the dig site Kom Ombo in Aswan, a city in southern Egypt located about 530 miles (852 kilometers) from Cairo. The graveyard was used between 1750 B.C. and 1550 B.C. by nomadic people who traveled north into the region from Nubia, Secretary General of Egypt's Supreme Council of Antiquities Mostafa Waziri said in the statement.

Other recent discoveries at Kom Ombo include a statue of a cobra-crowned sphinx, engravings of a warrior pharaoh and a stone head representing the Roman emperor Marcus Aurelius.

In the recently excavated gravesite, the woman's body was curled inward and wrapped in a leather shroud. Scientists estimated that she was around 25 years old when she died. Archaeologists inspected her pelvic bones and discovered abnormalities that may have stemmed from an old fracture that was improperly set or that had healed incorrectly. This may have contributed to the woman's difficulties during childbirth, ultimately leading to her death and that of her fetus, Waziri said.

Objects found in the grave included a pottery jar, a container that was colored red on the outside and black on the inside in the style of pots made in ancient Nubia, and beads made from the shell of an ostrich egg. Some unworked shell material was included near the body, possibly indicating that the woman was a bead maker, according to the statement.

All of these funerary objects were likely included to honor the dead woman and to show the respect of her family and loved ones, ministry representatives said.