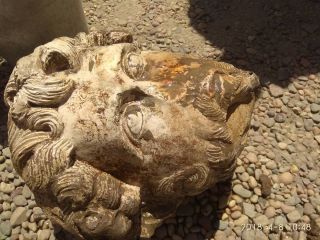 Egyptian archaeologists have announced a rare discovery out of a temple along the Nile River: the carved head of the Roman emperor Marcus Aurelius.

The stone head depicts the emperor, who ruled from A.D. 161 to 180, with a shock of curly hair and a meandering beard-mustache combo, according toEgypt's antiquities ministry. The carved head was found in a well next to the temple of Kom Ombo, which was originally built around 180 B.C. and is located in Egypt's Aswan governorate.

The temple was dedicated to two Egyptian gods, the crocodile god Sobek and the falcon-headed Horus, according to The British Museum. Archaeologists have excavated so many mummified crocodiles from cemeteries around the temple that, in 2012, the Egyptian Ministry of State for Antiquities opened a museum next door dedicated to croc mummies.

When Kom Ombo was built, Egypt was under the control of the Ptolemaic dynasty, a family of Macedonian Greeks. The Romans conquered the Ptolemy family in 30 B.C., bringing Egypt under Roman rule.

Nevertheless, it is rare to find statues of the emperor Marcus Aurelius in Egypt, according to the country's antiquities ministry. The statue fragment bearing Aurelius' likeness was discovered during a project meant to reduce groundwater at the Kom Ombo temple. It was 49 feet (15 meters) deep in a well that was once used as a gauge to determine the Nile's depth. The head measures about 16 inches (40 centimeters) tall, 13 inches (33 cm) wide and a little over 13 inches (34 cm) thick.