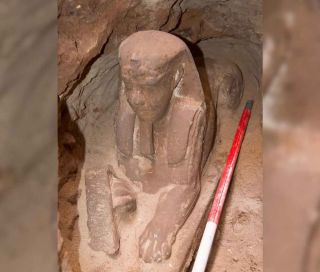 This sphinx, which dates back just over 2,000 years, was discovered in Aswan, Egypt.
(Image: © Egypt Ministry of Antiquities)

A beautifully preserved statue of a sphinx wearing a cobra crown has been discovered in Aswan, Egypt.

The Egyptian Ministry of Antiquities announced the discovery Sept. 16 on its Facebook page. According to the ministry, archaeologists were working to reduce groundwater in the Temple of Kom Ombo at the site when they stumbled across the statue. The figure is about 11 inches (28 centimeters) wide and 15 inches (38 cm) tall, the BBC reported.

Kom Ombo sits along the banks of the Nile River in southern Egypt. It was constructed between 305 B.C. and 30 B.C., during the Ptolemaic period, making the statue just over 2,000 years old. The temple where the sphinx was found is constructed in a rare dual design, with one sanctuary devoted to Sobek, the crocodile god, and the other to Horus, the falcon-headed god associated with the pharaohs, according to Discovering Egypt.

The temple hosts a series of elaborate carvings, some showing ancient physicians at work with early surgical instruments. It was also the site of a recent discovery of two paintings on sandstone made during the reign of King Ptolemy V, according to the Ministry of Antiquities. Ptolemy V ruled between 204 B.C. and 181 B.C. [See Photos of Mummies Discovered at an Ancient Egyptian Cemetery]

The newly discovered sphinx is a pipsqueak compared with the most famous sphinx, the Great Sphinx of Giza, which towers 66 feet (20 meters) over the desert. That sphinx was probably constructed between 2558 B.C. and 2532 B.C., as far back in history from the Aswan sphinx as the Aswan sphinx is to modern times. Egyptologists don't know for sure what the Great Sphinx symbolized, but the human-headed lion may have had something to do with the worship of the sun, according to Smithsonian Magazine. Many years later, around the 14th century B.C., the pharoah, Thutmose IV, revived the sphinx as a symbol of royalty and the sun, and it eventually became an image intertwined with Egypt's identity.

The Ptolemies were Greek Macedonians, but they borrowed many Egyptian symbols for their art. For example, a famous bust in the British Museum shows Ptolemy I Soter, the founder of the dynasty, wearing the familiar flowing headdress of earlier pharaohs. The Ptolemic sphinx discovered at Aswan wears another of these symbols, the Uraeus, an Egyptian cobra perched upon the brow. The Uraeus was a symbol of royalty and authority. The sphinx also sports a ceremonial royal beard and a carved necklace or collar.