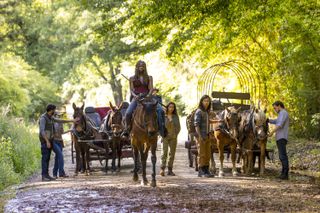 Horses play a bigger role in this season of AMC's "The Walking Dead." Good thing they don't seem to turn into zombies.
(Image: © AMC Networks)

Animals do not turn into zombies — only humans do. At least, that seems to be the rule so far in AMC's sci-fi zombie thriller, "The Walking Dead" (which airs Sundays at 9 p.m. EST/8 p.m. CST).

The characters in the show have now survived the zombie apocalypse for many years and are striving to build self-sustaining communities. This development has made certain animals, especially mules and horses, valuable creatures to have around.

But, at least so far, none of the characters seem concerned that the horses could turn into enormous, galloping, human-eating zombies anytime soon. [9 Reasons We Have an Undying Interest in the Undead]

We don't know for sure what kind of pathogen causes the zombie disease — it could be bacterial, viral, fungal, protozoan or maybe even something from outer space that humans have never seen before (this is sci-fi, after all). However, certain events in the series suggest it's a virus that's causing the zombie outbreak, such as when the characters learn that everyone turns into a zombie when they die, whether or not they were ever bitten by one.

So, if this virus is so widespread, how is it possible that only humans are affected by it?

"Some viruses are very species-specific," said Tara Smith, a microbiologist and infectious disease epidemiologist at Kent State University in Ohio. For example, measles and small pox, she said. "Humans seem to be the only host for those, they don't jump species."

But of course, not all viruses are limited to a single species.

"One of the ways we think Ebola may have spread into people, especially the 2014 West African people, was contact with bats or potentially eating bats, we're not 100 percent sure," Smith said. "Either way, bats seem to the reservoir, but they don't seem to be affected by it. It's not symptomatic in them, but it causes huge symptoms in humans."

And, that's true for other viruses, too, such as hantavirus, Smith said. Rodents carry hantavirus in the western United States and when they poop, their droppings dry and the virus becomes aerosolized, then people breathe in the virus and become infected.

It's possible the zombie virus in "The Walking Dead" works in the same way, Smith said.

On the other hand, the virus could affect a few select groups of animals, "like flu viruses," she said. "Some flu viruses can affect a broad range of species, and we saw that with H1N1 outbreak in 2009."

The H1N1 flu, also known as swine flu, is a respiratory infection that started in pigs and became a pandemic in the United States in 2009. The virus is still widespread and continues to show up seasonally, according to the Centers for Disease Control and Prevention.

In season four of "The Walking Dead," the characters had made their shelter in a prison and started raising pigs. But the pigs got sick and so did the humans. It could have been swine flu — we never learn if the humans gave a virus to the pigs or if it was the other way around, but anyone who caught the illness didn't survive. [5 Essential Swine Flu Survival Tips]

The pigs didn't appear zombified, though, and so far, none of the other animals we've seen in the show have either.

"So, whatever it is, it still seems to be human specific, otherwise you would expect to see zombie animals," Smith said.

"Viruses typically have a tropism — that means they can only bind to certain types of cells," Smith said. "Sometimes the protein they have that would bind to cells might be ubiquitous to all animals or all mammalian species, or it can be really specific."

As an expert in infectious diseases, Smith has found herself writing and talking about hypothetical zombie epidemics a few times in the past. She said her tips for avoiding a zombie pathogen are the same for any real pathogen: Wash your hands, cook meat thoroughly and avoid cuts or lacerations when butchering animals. In general, "you want to avoid as much blood contact as possible," she said.

Other than Daryl's new dog, it doesn't seem like the survivors on "The Walking Dead" have pets, and there are only a few domestic livestock animals, but still, Smith recommends they "try to minimize time spent in close contact with [their] animals." For the most part, make sure animals and people stay separated, she said. "That way, if there is an outbreak, at least you have some separation between your animals and the people."