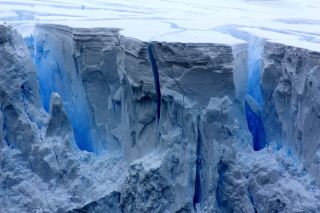 Beneath the Antarctic ice lie the remnants of "lost" continents.
(Image: © Vipersniper/iStock/Getty Images Plus)

A new map reveals the remnants of ancient continents lurking beneath Antarctica's ice.

The map shows that East Antarctica is made up of multiple cratons, which are the cores of continents that came before, according to study leader Jörg Ebbing, a geoscientist at Kiel University in Germany.

"This observation leads back to the break-up of the supercontinent Gondwana and the link of Antarctica to the surrounding continents," Ebbing told Live Science. The findings help reveal fundamental facts about Earth's tectonics and how Antarctica's land and ice sheets interact, he wrote in an email. [Antarctica: The Ice-Covered Bottom of the World (Photos)]

Because the continent is so remote and buried in ice, Antarctica is a bit of a blank spot on the geologic map, Ebbing said. The researchers used data from the European Space Agency's Gravity field and steady-state Ocean Circulation Explorer (GOCE) satellite to fill in the blanks. GOCE orbited Earth from 2009 to 2013, gathering data on the planet's gravity field. Gravity's pull differs very slightly from one point on Earth to another, depending on changes in topography and the density of the planet's interior.

By measuring these changes, GOCE provided the data to make a full gravity map of the planet. Ebbing and his team used other satellite data to virtually strip the ice from Antarctica to focus on the bedrock beneath.

When they looked at this layer, they found evidence of the continent's history as part of Gondwana, a supercontinent made of the modern Southern Hemisphere continents, which broke up about 180 million years ago. East Antarctica's crust is thicker than West Antarctica's: It's between 25 miles and 37 miles (40 and 60 kilometers) thick, compared with the West's 12 miles and 22 miles (20 and 35 km) thick. The East Antarctic crust is also a mishmash of old cratons, Ebbing said, including the Mawson Craton, which has a matching fragment in southern Australia.

The new data reveal more complexity in East Antarctica's ancient cratons than previously known, Ebbing said. The modern-day continent is also host to regions called orogens, which are crumpled-up regions where ancient continents would have rammed together to build mountains.

Another intriguing discovery was a low-density area beneath Marie Byrd Land in West Antarctica. The existence of this low-density portion of the upper mantle — the layer of the planet beneath the crust — may be due to an ancient mantle plume, Ebbing and his colleagues wrote Nov. 5 in the journal Scientific Reports. Mantle plumes are places in the mantle where hot blobs of rock rise like the lumps in a lava lamp. They can sometimes lead to the formation of volcanoes. The Antarctic mantle plume would date back to sometime in the last 66 million years, according to the researchers.