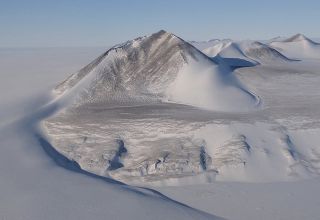 An image of the mountains in the Shackleton Range, bordering Recovery Glacier, East Antarctica, snapped during a NASA IceBridge flight on Oct. 18, 2018.
(Image: © NASA IceBridge)

An icy mystery brewing under Recovery Glacier in Antarctica has scientists scratching their heads. Where researchers once thought there was a network of under-ice lakes, there now seem to be none.

Antarctic researchers have long believed that large lakes lie hidden beneath the glacier in East Antarctica, trapped between the base of the ice and the bedrock of the Antarctic continent. A new study, though, failed to find any evidence of such large bodies of water.

"They're probably not there," said the study leader, glaciologist Angelika Humbert of the Alfred Wegener Institute's Helmholtz Center for Polar and Marine Research in Germany.

This apparent lack of lakes is very weird. Without these bodies of water, researchers can't easily explain other observations made about the ice, like the pockets where the surface of the ice rises and falls in cycles or the glacier's flow toward the sea. [Photos: Meltwater Lake Hidden Under Antarctic Ice]

"It's hard to understand how it couldn't be water," said Ted Scambos, a research scientist at the Earth Science and Observation Center at the Cooperative Institute for Research in Environmental Sciences in Boulder, Colorado who was not involved in the new study.

The glacier in question is an enormous river of ice in East Antarctica called Recovery Glacier; its basin stretches 621 miles (1,000 kilometers) inland from the sea and drains 8 percent of the volume of the East Antarctic Ice Sheet. This is currently "a calm glacier," meaning it's not undergoing any dramatic speedup, Humbert told Live Science. But it has great potential for change as global temperatures rise, she added.

Unraveling how the glacier moves and what influences the speed at which it flows will help researchers understand the whole ice sheet's response to climate change, Scambos said. Satellite observations had revealed isolated pockets where the ice rises and falls by several meters over months or years.

"The vertical motion has always been attributed, and in some other places proven, to be associated with water bodies beneath the ice," Scambos told Live Science.

Humbert and her colleagues conducted an airplane-based survey of the glacier in 2014, using radar waves to penetrate the surface. As the waves bounced back to a receiver in the airplane, they could reveal things like the thickness of the ice, the presence of water, and the location of boundaries between ice, water and rock. The goal of that survey wasn't necessarily to search for subglacial lakes, Humbert said; the whole region was a blank spot on the map, and the scientists wanted to know what kind of topography sat under the glacier.

The data, though, revealed something unexpected. In areas where satellite data suggested lakes should be, the radar revealed no water. [Antarctica: The Ice-Covered Bottom of the World (Photos)]

"There have been four really large lakes suggested and 11 smaller lakes, and we found by far less," Humbert said. "There is one larger area where you could consider a lake to be, but it could also be a swampy area" of wet sediment.

The researchers reported their findings Wednesday (Nov. 7) in an open-access article in the Journal of Geophysical Research.

Scambos isn't ready to rule out the existence of lakes entirely. The deep troughs under the glacier suggest flowing water, he said, and there's no good explanation for why the ice surface rises and falls in some areas, unless there are lakes under the ice draining and filling in some sort of cycle.

Complicating the issue is that radar is a tricky tool for measuring ice, Humbert said. The imaging of the subsurface that radar provides is dependent on how the waves travel through the ice, water or rock. This movement is partially dependent on the temperature of the ice, she said. And researchers don't know much about the ice temperature within Recovery Glacier. This makes it tougher to differentiate between true lakes and areas where the glacier might sit atop very wet sediment or mud, she said.

Finding answers may take time. Humbert and her team are planning a trek to the glacier with explosives, which they'll detonate in small batches to create seismic waves. As the waves rebound back to the surface, they will carry information about the structures below the ice. But Recovery Glacier is wildly remote, and supplies must be carried nearly 500 miles (800 km) from the nearest scientific outpost, Humbert said. The mission will happen in 2021, at the earliest.

In the meantime, the best place to find clues is in satellite data, Humbert said. ICESat-2, a satellite that uses laser pulses to measure changes in the ice, launched this year and will provide a sharper-than-ever picture of how the glacier is changing, Scambos said. He and his collaborators also want to work with Humbert's team to piece together all the disparate evidence for what's going on beneath the glacier.

"Hats off to them for getting the data," he said. "And now, we've got some reconciling to do."