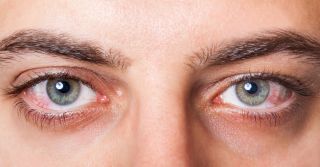 Downing a high dose of a liquid erectile dysfunction drug gave one man in New York an unexpected side effect: it caused his vision to turn, and stay, red, according to a new report of his case.

Indeed, two years after the incident, the man's vision remains altered, according to the case report, which was published Oct. 1 in the journal Retinal Cases & Brief Reports.

The man, 31, visited the urgent care clinic at the New York Eye and Ear Infirmary of Mount Sinai two years ago, complaining of red-tinted vision and decreased contrast in both of his eyes. (Vision contrast refers to the ability to distinguish an object from its surroundings, based on differences in light and color.) ['Eye' Can't Look: 9 Eyeball Injuries That Will Make You Squirm]

He told the doctors that he bought a liquid erectile dysfunction drug online and drank it straight from the bottle. The drug contained the compound sildenafil citrate, which is the generic version of Viagra. Because the man drank the drug straight out of the bottle, he didn't know how much he'd consumed … but he guessed it was much more than was instructed.

Eye-imaging and other exams showed that he had damaged cells on his outer retina, which is the back part of the eye. Specifically, he damaged his photoreceptors — cells in the retina that transform light into electrical signals allowing us to see. There are two types of photoreceptors: cones, which allow us to see in color, and rods, which allow us to see in dim light. Imaging tests revealed that the man had damaged the color-sensing cones.

In fact, a common side effect of sildenafil citrate involves changes in vision, said senior case report author Dr. Richard Rosen, the director of retina services at New York Eye and Ear Infirmary of Mount Sinai, who treated the man. Indeed, a previous, preclinical study done by Pfizer (the makers of Viagra) had shown that high doses (200 milligrams) of these drugs resulted in visual problems in 50 percent of the subjects, according to the case report.

But typically, those problems go away within 24 hours, Rosen told Live Science. It's also more common for people to develop blue-tinted vision, rather than red-tinted vision, though the latter has been reported before, as has yellow-vision, he added.

Rosen emphasized that the particular drug the man purchased online and took didn't go through the standard U.S. Food and Drug Administration approvals for purity and accuracy of concentrations of chemicals used, even though it contained the same generic drug as Viagra. This means the drug could have an even greater toxicity, the authors wrote in the report. In fact, the bottle, which Rosen said was called "Iron Man," says it shouldn't be consumed by people, he added.

These drugs, which act on the enzyme involved in maintaining an erection, can also cross-react with a very similar enzyme found in the eye that's involved with vision. "The enzyme systems of the eye are very delicate" and "exquisitely sensitive to anything toxic," Rosen said.

That's why there are a number of medications that can cause side effects in the eyes, he added.

The case report serves as a "cautionary tale for people," Rosen said. A common myth is that "a little is good, a lot is much better," he said, but that certainly doesn't apply to ED drugs purchased online. And though the man's symptoms are improving, his vision hasn't completely returned to normal. He could have permanent damage, Rosen said.