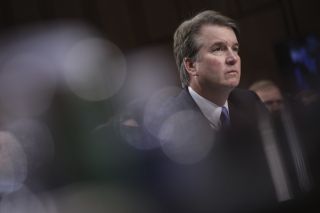 Editorial note: If Jim Hopper had been permitted to provide his expert testimony at the September 27, 2018 Senate Judiciary Committee hearing on Judge Kavanaugh’s confirmation, these would have been his remarks.

Incomplete memories of sexual assault, including those with huge gaps, are understandable — if we learn the basics of how memory works and we genuinely listen to survivors.

Such memories should be expected. They are similar to the memories of soldiers and police officers for things they’ve experienced in the line of fire. And a great deal of scientific research on memory explains why.

I’m an expert on psychological trauma, including sexual assault and traumatic memories. I’ve spent more than 25 years studying this. I’ve trained military and civilian police officers, prosecutors and other professionals, including commanders at Fort Leavenworth and the Pentagon. I teach this to psychiatrists in training at Harvard Medical School.

As an expert witness, I review videos and transcripts of investigative interviews. It’s like using a microscope to examine how people recall—and don’t recall—parts of their assault experiences. I’ve seen poorly trained police officers not only fail to collect vital details, but actually worsen memory gaps and create inconsistences.

Ignorance of how memory works is a major reason why sexual assault is the easiest violent crime to get away with, across our country and around the world.

Yet when I teach military service members and police officers, it’s mostly about making light bulbs go on in their heads and helping them connect the dots from their own traumatic memories to those of sexual assault survivors.

Soldiers and police know that traumatic memories often have huge gaps. They know it can be difficult or impossible to recall the order in which some things happened. They know they’ll never forget some things from that alley in Ramadi where their best friend died—even though they can’t remember many details of the battle, or which month of their third Iraq rotation it was.

That’s why soldiers and police often approach me after trainings to say, “You get it,” or “now I understand how it’s no different for people who’ve been sexually assaulted.”

In short, what I’m talking about here today are realities,  not theories or hypotheses – realities known all too well by our nation’s defenders and its millions of sexual assault survivors.

The science helps us understand why people have incomplete and fragmentary memories, including the brain structures and processes involved, while revealing complexities we would not otherwise discover. And science gives us conceptual tools—mental spotlights, if you will—that help us to see reality more fully and clearly.

Now, briefly, I will use scientific knowledge and concepts to shed light on how memory works, and to inform your understanding of other testimony you are hearing today.

Encoding refers to the temporary registration of sensations and thoughts into short-term memory, a kind of “buffer” or RAM that can hold information up to 30 seconds.

For any event we experience, including this one, we're not taking in every detail. From moment to moment, what our brain encodes is a function of what we're paying attention to, and what has emotional significance to us. Those details are called central details.

In contrast, what we're not paying attention to, or has little or no significance to our brain at the time, are called peripheral details. Those are encoded poorly or not at all.

Just a moment ago, was your attention on me, or someone or something else? Did that question I just asked have an emotional impact on you? Those factors are shaping what’s being encoded into short-term memory right now.

Critically, whether it’s an IED attack or a sexual assault, just because we—or an investigator, or even the survivor herself looking back later—believe some aspect of an event would or should be a central detail, that does not mean it was a central detail for the survivor’s brain at the time. Many who have been sexually assaulted don’t remember whether certain things were done to their body because, at that point, they were focused on the perpetrator’s cold eyes, or traffic sounds on the street below. That tells us nothing about the reliability of the details they do recall, and nothing about their credibility.

Storage is the next stage.That’s the transformation of encoded information so it can be retained in the brain, and the brain processes that keep things from being lost.

From the outset, storage of central details is stronger than storage of peripheral ones. Those peripheral details fade quickly, and if not remembered and re-encoded, are mostly gone within a day. We all know this: What we pay attention to and has significance to us is what we’re more likely to remember over time.

Here’s another factor that affects storage strength: Whether a detail’s emotional significance to us is negative or positive. Evolution has selected brains that are biased to encode the negative more strongly, to enable survival in a world with predators and other grave dangers.

If you go on a Sunday morning show, which of the things you say will those watching be more likely remember? Which of the President’s tweets? That “negativity bias” is shaping what our brains are right now working on storing — or not — as memories of this experience.

Most important of all, when it comes to what will remain stored in our brains, is this: How emotionally activated, stressed, or terrified we were during the experience. Decades of research have shown that stress and trauma increase the differential storage of central over peripheral details.

Soldiers know the tunnel vision that can kick in during combat, the effects it has on their memories and what they can report to commanders in after-action reviews. They train to automate the habit of forcing themselves to move their head and upper body from side to side to escape the tunnel [demonstrating].

Whether it’s an enemy ambush in an alley or a sexual assault in a bedroom, our brain will encode and retain what were—for us, moment-by-moment as the attack unfolded – the central details of our experience. Seeing an enemy suddenly appear and fire at us from 10 feet away, and fearing we will die. Struggling to breath with a hand over our face, and fearing we will die. Seeing the enemy’s face as our bullets enter his chest. Seeing the face of a boy we know as he holds us down and tugs at our clothes. Such details can be burned into our brains for the rest of our lives.

Most of the other details will be lost, and over enough time, that includes even relatively central ones—at least if they haven’t been retrieved and re-encoded.

Which brings me, finally, to memory retrieval. I only have time to say a few important things.

Yes, memories generally fade. That’s partly because what starts out as a relatively detailed memory becomes more abstract over time. We remember the gistof what happened and a few of the most central details. When we remember or tell the story, our brain is literally piecing it together on the fly.

That’s another reason why, as memory researchers love to say, memory is not like a videotape. Sometimes we get confused. Sometimes other people, or even movies we watch, supply inaccurate details that are inadvertently re-encoded into the overall memory and its abstract story.

But memories of highly stressful and traumatic experiences, at least their most central details, don’ttend to fade over time. And while people may have the superficial abstract stories they tell themselves and others about their worst traumas, that’s not because the worst details have been lost. It’s often because they don’t want to remember them, and don’t (yet) feel safe to remember them.

What if that soldier is asked by a friend back home, “Did you ever kill someone close-up in Iraq?” If he doesn’t ignore the question, he may just say, “Yeah, once some guy jumped out in front of me and started firing but I blew him away.” He won’t describe the look on that man’s face as he died – and he may succeed at keeping it out of his mind’s eye, at least that time.

The same is true for many victims of sexual assault. They have bland abstract descriptions they tell themselves and others, for example, their husband early in the marriage, before they feel safe enough to share the painful details, and that sharing some of those is necessary for other reasons. They might not have retrieved the horrific central details for months or years. But that doesn’t mean those vivid sensory details and wrenching emotions aren’t still there, never going away, ready to be retrieved under the right (or wrong) circumstances.

Yes, peripheral and less central details can get distorted more easily than many people realize. But decades of research have shown that the most central details are noteasy to distort, which typically requires repeated leading questions from people in authority or a very strong internal motivation for doing so.

But without compelling evidence of such influences, there is no scientific or rational basis for assuming that such distortions have occurred, especially for those most central and horrible details the person has been both tormented by and trying to avoid, sometimes successfully and sometimes not, for years or even decades.

Thank you for your attention, and I am happy to answer any questions about how the science of memory can help you understand and evaluate the memories reported by the people involved in this matter.

The views expressed are those of the author(s) and are not necessarily those of Scientific American.