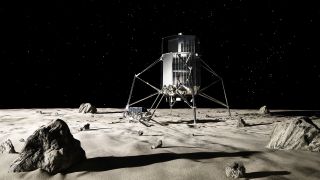 A promotional image from iSpace includes artwork depicting both a rover and a lander.
(Image: © iSpace)

A Japanese company called iSpace announced Wednesday (Sept. 26) that it will launch a lunar lander and lunar rovers to the moon in 2020 and 2021.

The uncrewed iSpace craft will travel to space aboard SpaceX Falcon 9 rockets, the company said. If all goes well, then in 2020, the company will attempt to oribit the moon with one of its landers. In 2021, it will attempt to safely put a lander on the lunar surface and deploy robotic rovers to explore. It's not entirely clear what the landers would search for, but iSpace has indicated in the past that it hopes to find resources, chiefly water, to exploit for future human habitation.

"We share the vision with SpaceX of enabling humans to live in space, so we're very glad they will join us in this first step of our journey," iSpace founder and CEO Takeshi Hakamada said in a statement. [How to Get to the Moon in 5 'Small' Steps]

SpaceX's own lunar plans involve flying people into the vicinity of the moon in 2023, but it will make no attempt to overcome the technical challenges necessary to conduct a landing.

It's worth noting that the last time this company had a deadline for landing on the moon, it didn't meet it. This iSpace two-part mission will take the name HAKUTO-R. "Hakuto" means "white rabbit" in Japanese and refers to Japanese folklore about a rabbit on the moon, the company said. It first used the name as a competitor for Google's never-paid $30 million "Lunar X Prize," which would have been awarded to a company that landed a device on the moon by March 31, 2018. Hakuto, like every other group in the competition, failed to develop a workable device by that date.