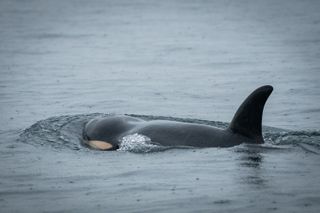 After a remarkable month-long cooperative effort to save a young, ailing orca (Orcinus orca) named Scarlet, or J50, authorities now presume the animal is dead because she hasn't been spotted in more than two weeks, King 5 News reported.

Scarlet's death means the subpopulation of endangered southern resident killer whales now includes only 74 individuals, down from 98 individuals in 1995, according to the National Oceanic and Atmospheric Administration (NOAA).

Scarlet was a 3-year-old female who was part of the J pod, one of three small groups of orcas (also called killer whales) within the southern resident killer whale subpopulation. [In Photos: Response Teams Try to Save Starving Killer Whale]

The J pod also includes J35, or Tahlequah, a female whose calf died a half-hour after it was born on July 24. Biologists watched the grieving mother carry her dead calf around for hundreds of miles and an unprecedented 17 days.

Since early August, teams of biologists and veterinarians in Washington and Canada have worked together to closely monitor Scarlet's health. When weather conditions allowed, the teams collected breath and fecal samples from Scarlet and administered antibiotics through a dart.

As part of the rescue effort, fishermen with the Lummi Nation, a Native American tribe in western Washington, attempted to feed Scarlet fresh salmon by delivering the live fish through a tube placed in the water and pointed in her general direction. They're not sure if Scarlet chowed down on the easy prey, but even if she did, her health continued to decline.

On Sept. 12, NOAA announced that it was formulating a plan to capture Scarlet and bring her into captivity for rehabilitation. But Scarlet disappeared before the capture could be executed.

NOAA initiated an intense search using resources from air, land and sea with help from the U.S. Coast Guard, the Center for Whale Research and the West Coast Marine Mammal Stranding Network, among others. But now, after more than two weeks of thorough searching, Scarlet hasn't been found, NOAA reported.

Experts now have little choice but to assume the young orca is dead. And because she had become so thin and had very little blubber, her body likely sank to the seafloor, Lynne Barre, a biologist with NOAA, told Kiro 7.

Scarlet's death has inspired renewed efforts to conserve this dwindling population of orcas. Dr. Joe Gaydos, a veterinarian with the University of California, Davis, Wildlife Health Center, who was part of Scarlet's rescue team, is now compiling an electronic medical health database for members of Scarlet's family, with hopes that it could help diagnose future ailments, reported King 5 News.

The orca deaths have also reinvigorated petitions to remove dams in an effort to revive salmon populations and replenish the orcas' main food source, The Seattle Times reported. And at the end of last week, American and Canadian negotiators agreed to renew the Pacific Salmon Treaty, which governs salmon harvest and research throughout the Pacific Northwest region, National Fisherman reported.

Several nonprofit wildlife and environmental groups in the northwest Washington area organized a memorial service that was held last Friday (Sept. 21) in honor of both Scarlet and Tahlequah's calf. The invitation led with the message, "First, we mourn, then, we organize."