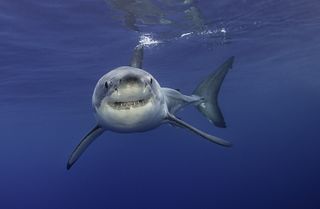 Each winter, an open ocean void in the deep sea of the mid-Pacific Ocean attracts large crowds of great white sharks (Carcharodon carcharias) that make the monthlong swim from the coasts of California and Mexico. Scientists followed the sharks to their mysterious ocean lair and discovered a few potential reasons why the fearsome predators might be attracted to the area, the Monterey Bay Aquarium Research Institute reported.

The sharks, known as the northeastern Pacific whites, feed on elephant seals and other marine mammals along the coast of California from about August to December, according to the Schmidt Ocean Institute. Then in December, the sharks swim to their meeting spot in the middle of the ocean, about halfway to Hawaii, where they spend their winter and spring before returning to California. Satellite images suggested the area was an oceanic desert, so scientists were stumped as to why these prolific predators would leave the food-rich waters off California.

Barbara Block, a marine scientist at Stanford University's Hopkins Marine Station, discovered the area more than a decade ago when she tracked tagged sharks to the area. She dubbed the spot the "White Shark Café," although she wasn't yet sure why the sharks were going there. [Image Gallery: Great White Sharks]

When Block and her colleagues at Stanford University and the Monterey Bay Aquarium ventured out to the mysterious shark-gathering zone this spring aboard the Schmidt Ocean Institute's research vessel Falkor, they were met with a surprise: a playland of sorts for jellyfish, phytoplankton, squid and fish — perfect ingredients for a great white shark buffet, the San Francisco Chronicle reported.

This group of specialized open-ocean marine life migrate up and down the water column each day, through what's called the midwater range — the zone just below where sunlight penetrates the ocean depths. During daylight hours, the creatures sink to the depths and then return to shallower waters at night.

Electronic tag data retrieved from 10 sharks revealed the predators were following a similar pattern — making several dives down to nearly 1,500 feet (450 meters) during the day and down to about 650 feet (200 m) at night. In April, the male sharks increased their dive activity, making up to 140 dives in a day, while the diving habits of female sharks remained unchanged, the San Francisco Chronicle reported.

"The story of the white shark tells you that this area is vitally important in ways we never knew about," Salvador Jorgensen, a marine scientist at the Monterey Bay Aquarium and one of the expedition leaders, told the San Francisco Chronicle. "They are telling us this incredible story about the mid-water, and there is this whole secret life that we need to know about."

But the difference between male and female shark diving behavior in April is still a mystery.

"Either they are eating something different or this is related in some way to their mating," Jorgensen told the San Francisco Chronicle.

The team is continuing to analyze data from this year's cruise with hopes of answering more questions about the biological significance of the White Shark Café. They plan to publish their results in the coming months, Jorgensen told Live Science.