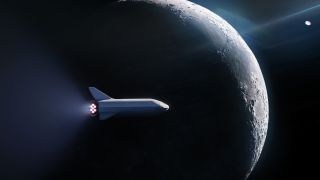 A mystery passenger will soon get a chance to fly around the moon, courtesy of SpaceX's Big Falcon Rocket
(Image: © SpaceX)

Ladies and gentlemen of Earth, prepare to meet the world's first lunar tourist.

According to an announcement on Twitter, SpaceX — the independent space exploration company founded by billionaire Elon Musk — has booked a "private passenger" on a round-trip journey around the moon. [Interstellar Space Travel: 7 Futuristic Spacecraft to Explore the Cosmos]

This mission is "an important step toward enabling access for everyday people who dream of traveling to space," SpaceX representatives tweeted last night (Sept. 13). "Only 24 humans have been to the Moon in history. No one has visited since the last Apollo mission in 1972." (SpaceX has yet to release any information on how much a trip to the moon would cost, but whether a majority of "everyday people" could afford the fare seems dubious. For comparison, Virgin Galactic, which takes passengers on a 90-minute flight that includes several minutes in zero-gravity, costs about $250,000 a ticket.)

The mysterious lunar passenger — whose identity will be revealed along with other key details Monday night (Sept. 17) at 9 p.m. EDT via a live webcast — will reportedly blast into space on SpaceX's newly redesigned Big Falcon Rocket (BFR), which was designed to carry a crew capsule holding up to 100 passengers on a trip to and from Mars. The massive spacecraft, which is still being developed, will have 31 engines on the booster vehicle alone and will be the most powerful rocket ever made, Space.com previously reported.

In 2017, SpaceX announced plans to send two tourists on a trip around the moon aboard the company's Crew Dragon capsule as early as late 2018. However, earlier this year, The Wall Street Journal reported that the flight would not embark until 2019 at the earliest.

No further details have been released about the date, duration or cost of Musk's moonshot vacation. At this point, it's also anyone's guess as to who the mysterious moon tourist will be. Could it be a protege of Billie, the moonwalking dolphin? Perhaps a representative from the The Flat Earth Society? Maybe Elon Musk himself?

As likely as that last option may seem, Musk may have already denied that he'll be taking a seat on the BFR this time around. When a Twitter follower asked the billionaire, "Elon, it's you, isn't it?" Musk simply replied with an emoji of the Japanese flag.

What does that mean? Tune in on Monday to find out.