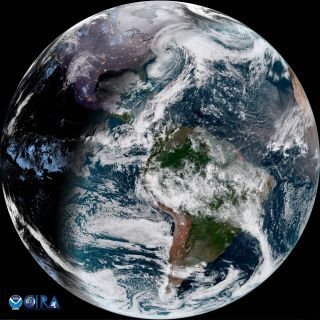 A bunch of very big corporations and rich men are hoping to start watching the whole Earth at all times with video cameras in outer space.

EarthNow LLC, a company that counts among its investors Bill Gates, Airbus, SoftBank and the "colorful" tech tycoon Greg Wyler, announced plans Wednesday (April 18) to "deploy a large constellation of advanced imaging satellites that will deliver real-time, continuous video of almost anywhere on Earth." The goal, the company said, is to offer customers the ability to watch events unfold on the planet in real time. EarthNow's website lists the far-ranging events the satellite constellation would keep an eye on, from "illegal fishing ships in the act" and "hurricanes and typhoons as they evolve," to "large whales as they migrate" and even your home.

In other words: a privately owned global surveillance network in space!

The cameras will be mounted on satellites originally developed for Wyler's satellite-internet company OneWeb and mass-produced by Airbus, according to a news release. [15 Secretive Places You Can Now See on Google Earth (And 3 You Can't)]

There's a sort of classic, techno-utopian vision behind all this: EarthNow CEO Russell Hannigan said in the statement, "We believe the ability to see and understand the Earth live and unfiltered will help all of us better appreciate and ultimately care for our one and only home."

But the company's actual goals are a bit more down to Earth. EarthNow said it hopes to sell its live-video and "intelligent vision" products first to "a range of government and enterprise customers." (Read: Big spenders are, at the very least, going to get first crack at watching the planet in this way.) Down the road though, the company said, it wants its video feeds to be instantly accessible from a smartphone or tablet.