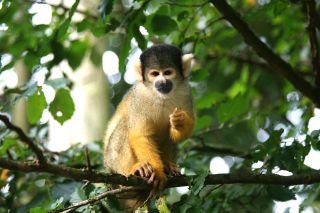 In April, a 23-year-old man broke into a New Zealand zoo to catch a squirrel monkey as a gift for his girlfriend, according to the New Zealand Herald. He didn't succeed and ended up injuring and traumatizing the monkeys.

Months later, one of the little primates is still displaying signs of stress.

Yesterday, John Owen Casford was sentenced to two years and seven months in prison for a burglary charge and other unrelated violent crimes he committed throughout the summer, including several assaults on his fellow primates (humans). [Gallery: Monkey Mug Shots]

Casford who described himself as "high as a kite" at the time, entered into the zoo through an unsecured gate and bust open two padlocks to get into the monkey enclosure.

The Bolivian squirrel monkeys (Saimiri boliviensis) were all found to be in distress the next morning, and zookeepers couldn't find one of them for some time, setting off a panic that she had been stolen. She was later found hiding in the enclosure, injured and extremely frightened.

Some of the monkeys had injuries that suggested they had been grabbed, according to the Herald. One monkey had a hematoma — a collection of blood outside a blood vessel that could result from trauma — and others had scratch marks.

After pleading guilty to his burglary attempt at the zoo, Casford met with zookeepers at a Restorative Justice meeting who told him it was a blessing that he wasn't able to catch the monkeys, both for the monkeys' sake and for his, according to the Herald.

"I don't know what happened in the squirrel monkey enclosure. The squirrel monkeys know. You say you couldn't find them and I don't speak squirrel. What I know is that by daybreak all the monkeys were distressed, two of them were injured, and you had a broken leg, two fractured teeth, a sprained ankle, and bruises on your back," the judge said while addressing Casford during his sentencing, according to the Herald.

Casford said he broke his leg while jumping a fence, according to the Herald. But it is unclear if he inflicted the other damages to himself or was attacked by the monkeys in self-defense.

"All primates are wild animals and will protect themselves when threatened," Erin Ehmke, the director of research at the Duke Lemur Center told Live Science in an email. "Squirrel monkeys are small primates but can certainly inflict bites and scratches."

Laurie Kauffman, an associate professor of biology at Oklahoma City University, agreed. "This is why they should always be approached cautiously, should not be pets and why any handling of captive wild animals should be left to experts," she said.

Animal thefts are not uncommon around the world, according to the Herald. Indeed, just about a month ago, three people kidnapped and carried a gray horn shark named Miss Helen out of the San Antonio Aquarium … in a baby stroller. In March, thieves stole an alpaca named Charisma from a New Zealand property, leaving behind his blind brother who relied on him to navigate the world.

And sometimes, people don't steal animals, but feel the need to get weirdly hands-on, like an unidentified man who recently jumped a railing at the Los Angeles Zoo to slap a hippo's butt.