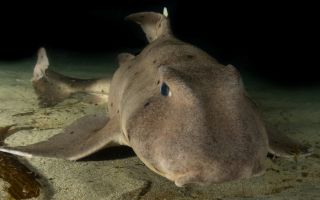 In San Antonio, a man is in custody after allegedly kidnapping a gray horn shark from an aquarium.
(Image: © Shutterstock)

A gray horn shark named Miss Helen is doing swimmingly after a harrowing brush with a trio of kidnappers.

Two men and a woman have been accused of abducting the young shark from the San Antonio Aquarium on July 28, swaddling her in a blanket, stuffing her in a bucket and then spiriting her away in a baby stroller, local outlet KSAT12 News reported.

Surveillance video captured the alleged criminals in action, and officials arrested a man in connection with the theft yesterday (July 30). Miss Helen was returned to the aquarium at 9 p.m. local time that evening, according to KSAT12 News. [Images: Sharks & Whales from Above]

The trio suspected of stealing the 2-foot-long (0.6 meters) shark allegedly lifted her from an open saltwater pool, an exhibit that contained several shark species that visitors are allowed to touch, KSAT12 reported. According to the KSAT12 report, one of the men allegedly lifted the shark out of the water by its tail, and the other man wrapped the shark in a blanket, later placing her in a bucket with a bleach solution and rolling her out to the parking lot in a baby stroller.

An aquarium employee spotted the suspected shark-nappers and called management. Jen Spellman, general manager of the aquarium, confronted them in the parking lot, but they refused to let her look inside the truck where they had hidden the shark, according to KSAT12.

Police tracked down the trio's vehicle and found Miss Helen in a tank at the home of one of the suspects, who confessed to the theft. Officers discovered other marine animals in the man's home as well, San Antonio Police Lt. Joseph Salvaggio told the San Antonio Express-News.

Video captured by local outlet KEN5 News and shared on Facebook shows Miss Helen's triumphant return to the aquarium in a gray plastic tub. She was greeted by cheering onlookers before being confined to a quarantined area, where aquarium staff checked her condition and began preparing her for a transition back to aquarium water, Jamie Shank, an aquarium spokesperson, told KEN5 News in the video.

"We didn't know if we would get her back," Shank said. "She appears very healthy. And now that we have her here, I'm overjoyed."

Horn sharks (Heterodontus francisci) like Miss Helen are bottom-dwelling, nocturnal crustacean-eaters that typically live in warm waters off the coast of southern California down to Mexico, and they get their name from the sharp spines that tip their pair of dorsal fins, according to the Florida Museum of Natural History.