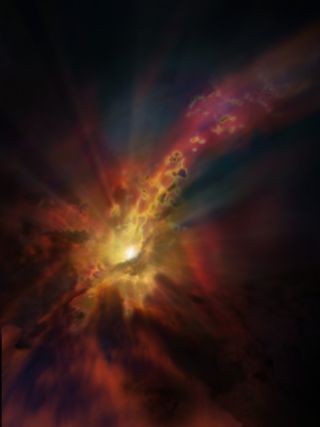 An artist's illustration shows what galactic wind might have looked like flowing out of a galaxy in the early universe.
(Image: © NRAO/AUI/NSF, D. Berry)

Galaxies are a bit like pets: You've got to give them their food steadily, over a long time. Dumping a year's worth of kibble into a giant bowl for your puppy might help your pet pack on the pounds, but this wouldn't be good for the animal in the long term — especially once that food source ran out early.

Give a galaxy all its fuel in the first eons of its life, and something similar happens. The object becomes what astronomers call a "starburst" galaxy, one that gobbles up its fuel too fast, quickly turning it all into stars. And starburst galaxies don't typically mature into old, stable galaxies like the Milky Way. They die young.

Some galaxies have a defense mechanism against that fate though: galactic wind. Streams of molecules flow out of these galaxies, escaping into the universe or orbiting as halos of matter — matter that can later rain back into the galaxy and provide fuel for later, healthier bursts of star formation. The wind slows the growth of a galaxy, giving it time to methodically reach an adult size. [Interstellar Space Travel: 7 Futuristic Spacecraft to Explore the Cosmos]

That's all according to a paper published today (Sept. 6) in the journal Science. And for the first time, the authors reported, they've seen this galactic wind in action in the early universe. Thanks to a bit of luck and a lot of careful examination, the researchers observed galactic wind flowing out of a galaxy located 12 billion light-years away from Earth and named SPT2319-55, the researchers wrote. Given how long it takes light to reach Earth from that far away, this means that the wind the scientists observed flowed out of its galaxy just 1 billion years after the Big Bang, in our universe's infancy.

"Observing winds in the distant universe is difficult," the researchers wrote. The light from these old galaxies is faint. In addition, the telltale fingerprints of that wind, observed as it moves, may be drowned out by other signals coming from the ongoing process of galaxy assembly, the researchers wrote.

To see the signature of stellar wind, the researchers relied on a helping hand from a second, not-so-distant galaxy. Massive objects like galaxies have so much gravity that they can bend and shape light like lenses. And in this case, one such gravitational lens made SPT2319-55 look much bigger from Earth, so the scientists at the Atacama Large Millimeter/submillimeter Array in Chile could observe the galaxy in much more detail than would otherwise have been possible.

The wind, which the researchers detected via spikes in the presence of a molecule called hydroxyl (OH), was blasting out of the galaxy at nearly 500 miles per second (800 kilometers per second), the authors wrote.

But SPT2319-55 is already a starburst galaxy, and it's unclear whether that wind will be enough to save it from its own appetites and allow it to grow into old age.

"Our results show that [the wind] is acting to disrupt and remove the molecular gas in SPT2319−55," the researchers wrote in the study, "and will likely suppress the rapid star formation in this galaxy in 100 [million years]. Whether this is sufficient to quench the star formation on a more permanent basis is less clear."

SPT2319-55 could have so much dark matter around it that the wind can't save the galaxy, the researchers wrote. When all that expelled wind tries to fall back into the galaxy to form new stars, the dark matter could knock it around, preventing it from accumulating, the authors wrote. In that case, despite its wind, SPT2319-55 will likely die young, a victim of its own greed and mass, doomed despite its protective winds.