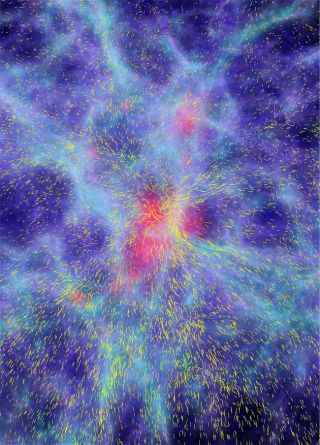 Paul Sutter is a visiting scholar at The Ohio State University's Center for Cosmology and AstroParticle Physics (CCAPP). Sutter is also host of the podcasts Ask a Spaceman and Realspace, and the YouTube series Space In Your Face. He contributed this article to Space.com's Expert Voices: Op-Ed & Insights.

In the beginning, there was a question mark. All else followed. The end.

We've all heard of the Big Bang theory (I'm talking about the cosmological model, not the TV show), but it's important to understand what that theory is and what it's not. Let me take this opportunity to be precisely, abundantly, emphatically, ridiculously, fantastically clear: The Big Bang theory is not a theory of the creation of the universe. Full stop. Done. Call it. Burn that sentence into your brain. Say it before you go to sleep, and first thing when you wake up.

The Big Bang theory is a model of the history of the universe, tracing the evolution of the cosmos to its very earliest moments. And that's it. Don't try to stuff anything else into that framework. Just stop. You can keep your meta safely away from my physics, thank you very much.

I'm emphasizing this because there is a lot of confusion from all sides, and it's best to keep it simple. The Big Bang theory is a scientific model, just like any other scientific model. We believe the theory is on the right track because it's — gasp — supported by extensive evidence.

You don't have to take my word for it. Since the idea was first cooked up, the Big Bang theory has survived decades of scientists fighting, scratching, backstabbing, criticizing, undermining, bickering, arguing and even name-calling, all in an attempt to crush their rivals and prove that their pet alternatives were superior. Why? Because whoever takes down a major scientific paradigm gets a free trip to Stockholm.

And at the end of it all, there's the evidence. You know, the actual universe that we're trying to understand. Any new observation is the scientific Thunderdome; two theories may enter, but only one can leave. And what was left after decades of evidence? Here's a hint: It's big.

The evidence starts with Edwin Hubble's note that every galaxy is, on average, flying away from every other galaxy. The universe is expanding. That itself is a pretty big deal. For millennia, the default assumption (can you blame anyone?) was that, while things change here on Earth, up in the distant heavens, stuff just sort of…is. Yeah, stars may blow up or galaxies may collide, but on the whole, the universe from last week looks pretty much like the universe today. Check again in a month? Yup, the same universe. At least that's what people thought.

But it's not. The universe today is different from how it was yesterday, and it will be different tomorrow. And it's not just on local scales; the whole shindig changes character one day to the next. [Evolution of the Universe Revealed by Computer Simulation (Gallery)]

And if you notice that, every day, the universe is getting bigger, you can make a tremendous leap of logic to come to the conclusion that, long ago, the universe was … smaller? Maybe? I guess? Like any good scientist, as soon as you cook up this kind of ridiculous, preposterous concept, you start thinking through what the consequences would be and how you might test it — I know, radical notions.

Here's the gist: The story of the past 14-ish billion years is a story of density. The universe is made of lots of kinds of stuff: hydrogen, helium, aardvarks, dark matter, gristle, photons, Ferris wheels, neutrinos, etc. All this stuff behaves differently at different densities, so when the universe was smaller, one kind of thing might dominate over another, and the physical behaviors of that thing would drive whatever was going on in the universe.

For example, nowadays, the universe is mostly dark energy (whatever that is), and its behavior is ruling the universe — in this case, driving a period of accelerated expansion. But a few billion years ago, the universe was smaller, and all the matter was crammed more tightly together. And by virtue of its density, that matter was the ruler of the roost, overwhelming dark energy, which was just a background wimp rather than the powerhouse it is now.

(Side note: The dark energy takeover happened at about the same time our solar system was getting its stuff together, and at the time, the universe was about half its present size.)

The birth of the Dark Energy Age might not seem that dramatic, but the further back you go in time — and the smaller you make the universe — the stranger it gets. Push back more than 13 billion years, when the universe was just one-thousandth of its current extent, and the matter that would one day make up entire galaxies is crammed together so tightly that atoms can't even form. It's so dense that every time a nucleus ropes in an electron, a careless high-energy photon slams into it, ripping the electron away. This is a plasma, and at one time, the entire universe lived like this.

Fast-forward to the present day, and the leftover light from the era, when the universe cooled and expanded just enough to let the first atoms form, continues to wash over us right now. But the universe is older and colder, and those high-energy gamma rays are now listless microwaves, creating a background permeating the cosmos — a cosmic microwave background, or CMB, if you will.

The CMB is not only one of the major pieces of evidence for the Big Bang (it's a baby picture of the universe…what else could you ask for?), but it's also a window to even earlier times. We may not be able to perceive the universe before the formation of the CMB, but the physics there leaves an imprint in that radiation field. It's, well, kind of important.

The further we push back in time, the stranger the universe gets — yes, even stranger than a plasma. Push back further, and stable nuclei can't form. Go even further back, and protons and neutrons can't stand the pressure and degenerate into their components: quarks and gluons. Push back even further and, well, it gets complicated.

The Big Bang theory can be summarized thusly: At one time, the entire universe — everything you know and love, everything on the Earth and in the heavens — was crushed into a trillion-Kelvin ball about the size of a peach. Or apple. Or small grapefruit. Really, the fruit doesn't matter here, OK?

That statement sounds absolutely ridiculous, and if you said it a few hundred years ago… Well, I hope you like barbecues, because you're about to be burned at the stake. But as crazy as this concept sounds, we can actually understand this epoch with our knowledge of high-energy physics. We can model the physics of the universe at this early stage and figure out the latter-day observational consequences. We can make predictions. We can do science.

The further along in age the universe gets, the more clear our picture becomes, but it's almost frightening to consider that our poor monkey brains are even contemplating such early epochs in the universe.At the "peach epoch," the universe was only a tiny fraction of a second old. In fact, it was even tinier than a tiny fraction — 10^-36 seconds old, or thereabouts. From there on out, we have a roughly decent picture of how the universe works. Some questions are still open, of course, but in general, we have at least a vague understanding.

At even earlier times, though, our understanding of the universe gets … fuzzy. The forces, energies, densities and temperatures become too high, and the knowledge of physics we've cobbled together over the centuries just isn't up to the task. In the extremely early universe gravity starts to get very important at small scales, and this is the realm of quantum gravity, the yet-to-be-solved grand riddle of modern physics. We just flat-out don't have an understanding of strong gravity at small scales.

Earlier than 10^-36 seconds, we simply don't understand the nature of the universe. The Big Bang theory is fantastic at describing everything after that, but before it, we're a bit lost. Get this: At small enough scales, we don't even know if the word "before" even makes sense! At incredibly tiny scales (and I'm talking tinier than the tiniest thing you could possible imagine), the quantum nature of reality rears its ugly head at full strength, rendering our neat, orderly, friendly spacetime into a broken jungle gym of loops and tangles and rusty spikes. Notions of intervals in time or space don't really apply at those scales. Who knows what's going on?

There are, of course, some ideas out there — models that attempt to describe what "ignited" or "seeded" the Big Bang, but at this stage, they're pure speculation. If these ideas can provide observational clues — for example, a special imprint on the CMB, then hooray — we can do science!

If not, they're just bedtime stories.

Learn more by listening to the episode “What banged the Big Bang?” on the Ask A Spaceman podcast, available on iTunes and on the Web athttp://www.askaspaceman.com. Thanks to Rafael Ribeiro for the question that led to this piece! Ask your own question on Twitter using #AskASpaceman or by following Paul @PaulMattSutter and facebook.com/PaulMattSutter.

Follow all of the Expert Voices issues and debates — and become part of the discussion — on Facebook, Twitter and Google+. The views expressed are those of the author and do not necessarily reflect the views of the publisher. This version of the article was originally published on Space.com.