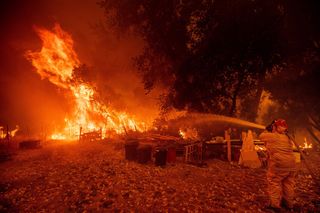 As wildfires burn huge swaths of California, the month of July blazed through climate records.

It was not only the hottest July in California's history, but it was also the state's hottest month ever, according to a new report issued Wednesday (Aug. 15) by the National Oceanic and Atmospheric Administration (NOAA).

Across the U.S., July was also hotter than usual. Average temperatures in the lower 48 states climbed to 75.5 degrees Fahrenheit (24.2 degrees Celsius). At 1.9 degrees F higher than the 20th century average, these sizzling temperatures rendered the month the 11th hottest July on record for the U.S., NOAA scientists reported at a press briefing. [Wildfires Blaze in Northern California (Photos)]

In fact, the three-month stretch from May to July was the hottest such period in the U.S. to date, according to the report. During that time, average temperatures reached 70.9 degrees F (21.6 degrees C), beating the previous record of 70.6 degrees F (21.4 degrees C), set in 1934.

Things were even more scorching in Death Valley. The blazing-hot desert experienced the hottest month observed anywhere on Earth, with average temperatures of 108.1 degrees F (42.3 degrees C). Arid, hot conditions baked Western states and lay the groundwork for destructive fires, particularly in Colorado and California. Many of the blazes have continued to burn into the month of August, and they have so far torched hundreds of thousands of acres.

More than one-third of the U.S. was undergoing drought in July — 34.1 percent, up from 29.7 percent at the beginning of the month. In Hawaii alone, drought conditions expanded to affect 30 percent of the state. However, Pennsylvania saw record amounts of moisture. With rainfall at 176 percent of average precipitation levels, this was Pennsylvania's wettest July on record.

Warm, dry conditions are expected to persist through November, and heaps of dry brush in Western states could keep large wildfires burning into the fall, Tim Brown, a director with NOAA's Western Regional Climate Center, announced at the news briefing. Wildfires may also be exacerbated by a climate trend that has emerged in recent decades; nighttime temperatures are remaining high, reducing humidity and making dead vegetation more likely to burn, leading to longer fires and more smoke production, Brown explained. And there isn't much relief in sight. Seasonal temperatures are likely to remain above normal in most of the U.S. through November, though above-average precipitation is anticipated in the southwest, according to the report.