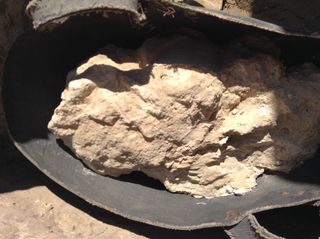 In the necropolis of Saqqara, Egypt, researchers discovered a broken jar containing what appeared to be a hunk of 3,300-year-old cheese — possibly the oldest known cheese in the world.
(Image: © Courtesy of Enrico Greco, University of Catania, Italy)

If you are still disappointed about being denied the opportunity to drink the toxic red mummy juice unearthed in Egypt last month, we have some good news for you. Researchers have just discovered the world's oldest cheese (also in Saqqara, Egypt), and it is almost certainly cursed… or at least contaminated.

The cheese in question was discovered among a large cache of broken clay jars inside the tomb of Ptahmes, former mayor of Memphis (ancient Egypt, not Tennessee) and a high-ranking official during the reigns of pharaohs Seti I and Ramesses II. The tomb is thought to have been built in the 13th century B.C., making it — and the cheese within — about 3,300 years old.

Researchers from the University of Catania in Italy and Cairo University in Egypt stumbled upon the cache during an excavation mission in 2013-14. Inside one of the fragmented jars, they noticed a powdery, "solidified whitish mass," according to a study published online July 25 in the journal Analytical Chemistry. Nearby, they found a scrap of canvas fabric that was likely used to preserve and cover the ancient blob of food. The texture of this fabric suggested that the food had been solid when it was interred alongside Ptahmes a few millennia ago — in other words, the find probably wasn't a jar of ancient spoiled milk.

To be sure about this, the researchers cut the cheese and took a small sample back to the chemistry lab for analysis. There, the team dissolved the sample in a special solution to isolate the specific proteins inside. The analysis revealed that the cheese sample contained five separate proteins commonly found in Bovidae milk (milk from cows, sheep, goats or buffalo), two of which were exclusive to cow's milk. The researchers concluded that the sample was probably a "cheese-like product" made from a mixture of cow's milk and either goat or sheep milk.

"The present sample represents the oldest solid cheese so far discovered," the researchers wrote in their study.

Of course, this being mummy cheese, there must be a curse attached, right? In this case, that curse might just be a nasty foodborne infection. According to the team's protein analysis, the cheese also contained a protein associated with Brucella melitensis, a bacterium that causes the highly contagious disease brucellosis. The disease is commonly spread from bovine animals to humans through unpasteurized milk and contaminated meat. Symptoms include severe fever, nausea, vomiting and various other nasty gastrointestinal ailments.

If the cheese is indeed infected with Brucella bacteria, that makes the find the "first biomolecular direct evidence of this disease during the pharaonic period," the researchers wrote. Further study is required to say for sure whether the protein in question came from a contaminated animal, but in the meantime, we offer this obligatory disclaimer: Please, do not eat the mummy cheese.