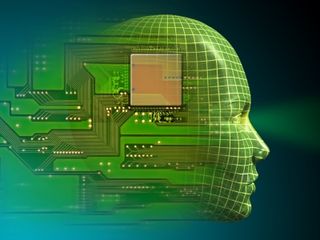 Electrodes placed directly on the surface of peoples' brains allow them to type just by thinking of letters. Image
(Image: © stockxpert)

A superthin computer just two molecules thick can solve complex problems and, somewhat like the human brain, can evolve to improve and perform many operations simultaneously.

This molecular processor can also heal itself if there is a defect, researchers added.

Modern computers operate at staggering speeds, capable of carrying out more than 10 trillion instructions per second. However, they generally perform operations in sequence, one thing at a time.

Brain cells or neurons, fire "only" 1,000 times per second or so, but the fact that millions of them simultaneously work in parallel means they can complete tasks more efficiently than even the fastest supercomputer.

The connections between neurons also evolve over time, growing stronger or weaker as the brain works out the best way to solve problems. In this way, such networks can learn over time.

Now an international research team from Japan and the United States has created a computer just two molecules thick that can replicate these traits of the human brain to a certain extent.

The building block of this computer is an organic compound known as 2,3-dichloro-5,6-dicyano-p-benzoquinone, or DDQ for short. This molecule can basically switch between four different electrically conductive states — think of a ring with four spokes.

The scientists deposited molecules of DDQ onto a surface of gold, which then spontaneously assembled into two layers, each a hexagonal grid of molecules.

Each molecule could wirelessly interact with its neighbors via their electric fields. These molecules continuously exchanged information in the form of electrons among themselves, at times causing molecules around them to change states. This is similar to how electricity flowing down wires makes transistors in microchips switch back and forth to encode data as ones or zeroes.

The results were patterns such as lines, triangles, hexagons and rhombuses, where each molecule within is set to a certain state.

Altogether, at least 300 molecules in the system interact together like a massively parallel computer, each changing states when data is written into the system. The patterns or "cellular automata" that result among the molecules function much like circuits on chips to direct the flow of electricity. The difference is that in this system, the patterns can evolve over time as new data is entered.

Also, like the brain but unlike other existing manmade computers, this new system can heal itself because the molecules that make up the computer can automatically reorganize themselves.

To probe the molecular computer's power, the researchers used it to successfully simulate two natural phenomena: the way heat diffuses through a material, and the way cancers grow in the body.

In principle, this new computer could also serve as a means to solve problems that conventional computers find too hard to tackle, "intractable problems that are considered impossible to finish within a finite time," explained lead researcher Anirban Bandyopadhyay, a physicist at the Japanese National Institute for Materials Science in Tsukuba.

These might include predicting the behavior of systems with many interacting bodies — anything from disease outbreaks to the evolution of galaxies, Michigan's Pati said.

One important weakness of the system is how it depends on scanning tunneling microscopy, which is a slow process. In the future, it may be possible to use multiple tips to simultaneously scan many molecules at one time, Pati suggested.

Since these molecules assemble themselves into grids, scaling them up to a larger system will not be a problem. The team's next target is a computer employing 1,000 molecular switches.

"The work is underway," Bandyopadhyay said.

Future research could also employ molecules that can get set to more than four states, for even more complex systems, Pati added.

The scientists detailed their findings online April 25 in the journal Nature Physics.