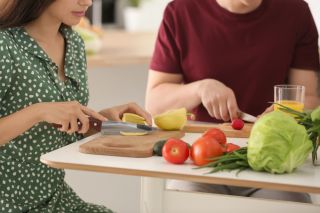 Women who have gone on a diet alongside men may have noticed a frustrating outcome: The pounds seem to fall off the men, while stubbornly sticking to women. Now, a new study delves into differences that take place when men and women diet — and confirms that, yes, men do lose weight faster.

In the study, published online Aug. 7 in the journal Diabetes, Obesity and Metabolism, the researchers tracked more than 2,000 overweight adults with prediabetes from Europe, Australia and New Zealand. For eightweeks, the participants followed an 800-calorie, mostly liquid diet that consisted of soups, shakes and hot cereals, plus a daily intake of 1.5 cups (375 grams) of low-calorie vegetables, such as tomatoes, cucumbers and lettuce.

At the end of the eight weeks, 35 percent of the men and women had normal blood-glucose levels and no longer had prediabetes, according to the findings. (Prediabetes means that a person has slightly elevated blood-sugar levels— a change that raises his or her risk of developing type 2 diabetes.) In addition, the researchers found that the men lost about 26 lbs.(11.8 kilograms), on average, over eightweeks, compared with about 22 lbs.(10.2 kg), on average, in women. [The Science of Weight Loss]

But it wasn't just that men dropped more total pounds than women — the researchers also found that men had larger reductions than women on other measures linked with better health, such as a lower heart rate and less body fat as well as a decreased risk of diabetes and metabolic syndrome. The latter refers to a collection ofsymptoms, such as high blood pressure and body mass index (BMI), that can raise risk for diabetes and heart disease.

The low-calorie diet affected womendifferently in other ways, the researchers found — and not all of the differences were positive. For example, compared with men, women experienced larger reductions in HDL cholesterol, the so-called good cholesterol—a change that could be bad for heart health. What's more, women in the study saw larger reductions in both bone mineral density, which may indicate weaker bones, and lean body mass, meaning less muscle. However, women did lose more inches in their hips than men.

The study confirms what any woman who has gone on a diet at the same time as her husband has already observed — men typically lose weight faster than women, said Dr. Elizabeth Lowden, a bariatric endocrinologist at Northwestern Medicine's Metabolic Health and Surgical Weight Loss Center at Delnor Hospital in Geneva, Illinois, who was not involved in the new study.

Men, thanks to their body composition, have more muscle and a higher metabolic rate than women, Lowden said. Since all of the participants were following a roughly 800-calorie-a-day diet, and men typically consume more daily calories than women when following their usual diets, they would have experienced a larger caloric deficit on the study diet and thus would be expected to lose weight faster than women, she said.

But the study went one step further to show different metabolic effects of the diet in men when compared towomen. Men typically have more weight in their midsection, known as visceral fat, which surrounds the internal organs, Lowden said. When peoplelose visceral fat, it improves their metabolic rate, helping them to burn more calories, she explained.

Women, on the other hand, typically have more subcutaneous fat, which is fat around their thighs, rear and hips that is important for childbearing, Lowden said. When people lose subcutaneous fat, this does not improve their metabolic risk factors, because this type of fat is not metabolically active, she explained.

Indeed, in the study, the researchers pointed to previous research that has suggested that the differences in metabolic outcomes observed in men and women who follow the same diet could be because men may mobilize more fat from their abdomens during weight loss, while women may lose more subcutaneous fat.

Still, though overweight men and women may experience some different health effects during a low-calorie diet, weight loss is always beneficial, Lowden said.

One of the limitations of the study is that it did not indicate whether some of the women participants had gone through menopause, Lowden said. After menopause, women tend to hold onto fat around their midsection like men do, and have more metabolically active fat, which could influence the results, she said.

Another limitation of the study is that the findings only focused on short-term changes and not on whether the weight lost by the participants and the health benefits achieved could be maintained over a longer period of time, the researchers wrote.