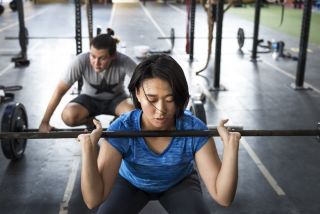 The reason? Fat and muscle are two different types of tissue, and one cannot be converted directly into the other, said Brad Schoenfeld, an assistant professor of exercise science at the City University of New York's Lehman College.

"The best analogy I can use is, you cannot turn an orange into an apple," Schoenfeld told Live Science. What a person can do instead, however, is lose fat and gain muscle as two separate processes, he added. [How to Jump-Start Your Exercise Routine]

To lose fat, you have to lose weight, Schoenfeld said, and losing weight requires burning more calories than you consume.

"It's a basic extrapolation of the first law of thermodynamics," Schoenfeld said, which states that energy, including the calories you eat, is conserved; it does not appear or disappear but simply changes form, whether it is burned to fuel bodily functions or stored as fat.

"That has been shown over and over again in highly controlled … studies," Schoenfeld said.

But to lose fat without also losing muscle, you have to eat the right foods: If you cut your calorie intake and don't eat enough protein, weight loss can result in a decrease in not only fat but also muscle.

"It's been shown over and over that low protein intake [while cutting calories] leads to an accelerated loss of muscle," Schoenfeld said. To make up for the lack of protein in the diet, the body burns not just stored fat but also muscle, which is made of protein. When this happens, your muscle cells shrink.

To prevent this from happening, Schoenfeld said he recommends that people who are trying to lose fat but not muscle consume about 0.8 grams of protein per pound of body weight per day. For example, a person who weighs 150 lbs. should eat about 120 grams of protein per day, equivalent to the amount of protein found in about three cups of chopped chicken, or 3.5 four-ounce chicken breasts. (Of course, not all your protein has to come from one source!)This is the amount of protein required for anyone lifting weights, Schoenfeld said, an activity that is essential for losing weight without also losing muscle.

To gain muscle, you have to do two things: eat a sufficient amount of protein, and engage in resistance training (in which your muscles oppose a force), such as lifting weights, to tax the muscles and thus stimulate growth. In addition to weight lifting, other forms of resistance training include working with resistance bands and resisting one's own body weight, through exercises such as squats and push ups, Schoenfeld said.

Resistance training is essential for gaining muscle while losing fat, Schoenfeld said. "You certainly should lift [weights] a minimum of twice a week, working all your major muscle groups, to [slow] any loss of muscle," he said. (Always check with a doctor before starting a new exercise routine.) As your muscles get stronger, your muscle fibers get bigger in a process called hypertrophy.

While aerobic exercise is generally healthy, it's not good for building muscle, at least not beyond the very early stages of working out, Schoenfeld said. "The only way, really, to keep gaining muscle is to push your body over time," he said. During aerobic exercise, however, there's a limit to how much a person can tax his or her muscles, and it's not enough to make the muscles bigger, he said.

You may worry that if you take time off from the gym, you'll get flabby. And that's a valid concern, Schoenfeld said.

But this doesn't happen because your muscle is turning into fat. Rather, if you're not lifting weights or doing some kind of resistance training, then you're not combatting age-related muscle loss, called sarcopenia.

So, as people get older, if they exercise less and continue to eat the same amount, or eat more, then they will also gain fat as they lose muscle.

However, age-related muscle loss "can be attenuated and completely obliterated if you lift weights, especially if you start lifting early," Schoenfeld said. Other forms of resistance training can also counteract sarcopenia, he said. "It is a function of the use-it-or-lose-it principle, and if you use it, you will not lose it."