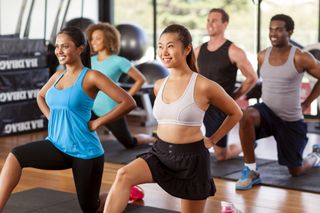 Getting too little exercise is tied to an increased risk of cancer — but according to a new study, most people in the U.S. don't know this.

In the study, researchers found that only about 3 percent of adults surveyed were aware that low levels of physical activity could raise cancer risk, according to the findings, published today (Aug. 9) in the Journal of Health Communication.

The findings are concerning, because people who are unaware of this link tend to be less motivated to engage in physical activity, said lead study author Erika Waters, an associate professor in the Division of Public Health Sciences at Washington University in St. Louis. [7 Cancer You Can Ward Off with Exercise]

In the study, the researchers surveyed about 360 adults in the U.S. The average age of the study participant was 47. In the survey, the participants were asked to name three illnesses caused by failing toget enough physical activity;only 44 percent of participants, however, provided three responses to this open-ended question.

The findings showed that about 66 percent of the adults in the study correctly identified that metabolic conditions, such as being overweight or having diabetes, were associated with getting too little exercise. In addition, 64 percent of the respondents correctly identified cardiovascular problems, and 11 percent identified musculoskeletal problems, such as back problems, osteoporosis or muscle loss. And 8 percent identified psychological complaints, such as depression or stress, as consequences of not getting enough exercise.

Only about 3 percent, however, listed cancer as a response to the question.

It's not entirely clear why people don't make the connection between insufficient physical activity and an increased risk of cancer. But Waters suggested that the explanation is largely a lack of awareness.

Public health efforts have well-publicized the link between low levels of physical activity and heart disease, diabetes and excess weight, but little attention has focused on the risk of developing cancer, Waters said. She addedthat when people exercise,it's very obvious to them that their heart pumps faster, they breathe harder and they could lose weight from moving more — which are all noticeable benefits to help them understand the impact of physical activity on their health.

But the biological link between not getting enough exercise and developing cancer tends to be less obvious to people, Waters said.

Current recommendations suggest that people in the U.S.get at least 150 minutes of moderate-intensity exercise, such as walking fast or riding a bike, each week to reduce their risk of cancer, Waters said. There is substantial scientific evidence that higher levels of physical activity areassociated with lower rates of specific cancers, including colon, breast and endometrial cancers, compared with those with low levels of physical activity, according to the National Cancer Institute.

One limitation of the study, the researcherssaid, is that the survey asked participants which "illnesses" may be caused by insufficient physical activity; responses may have been different if the question used the word "disease" instead.