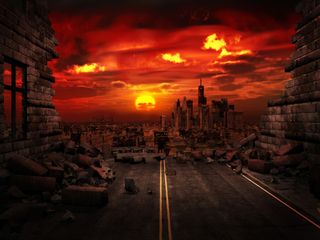 It's the year 2300. Extreme weather events such as building-flattening hurricanes, years-long droughts and wildfires are so common that they no longer make headlines. The last groups of humans left near the sizzling equator pack their bags and move toward the now densely populated poles.

This so-called "hothouse Earth," where global temperatures will be 7 to 9 degrees Fahrenheit (4 to 5 degrees Celsius) higher than preindustrial temperatures and sea levels will be 33 to 200 feet (10 to 60 meters) higher than today, is hard to imagine — but easy to fall into, said a new perspective article published today (Aug. 6) in the journal Proceedings of the National Academy of Sciences. [Top 9 Ways the World Could End]

In the article, a group of scientists argued that there is a threshold temperature above which natural feedback systems that currently keep the Earth cool will unravel. At that point, a cascade of climate events will thrust the planet into a "hothouse" state. Though the scientists don't know exactly what this threshold is, they said it could be as slight as 2 degrees C (around 4 degrees F) of warming above preindustrial levels.

Sound familiar? The 2 degrees C mark plays a big role in the Paris Agreement, the landmark 2016 agreement signed by 179 countries to combat climate change by reducing carbon emissions (the same one that the U.S. announced it would withdraw from last year). In that accord, countries agreed to work to keep global temperature rise well below 2 degrees C, and ideally below 1.5 degrees C, above preindustrial levels this century.

"This paper gives very strong scientific support … that we should avoid coming too close or even reaching 2 degrees Celsius warming," article co-author Johan Rockström, director of the Stockholm Resilience Center and a professor of water systems and global sustainability at Stockholm University in Sweden, told Live Science.

But many scientists argue that due to the immense impact of humans on climate and the environment, the current geological age should be called the Anthropocene (from anthropogenic, which means originating with human activity). Temperatures are almost as hot as the maximum historical temperature  during an interglacial cycle, Rockström said.

If carbon emissions continue unabated, the planet might leave the glacial-interglacial cycle and be thrust into a new age of the "hothouse Earth."

Today, we emit 40 billion tons of carbon dioxide a year from burning fossil fuels, Rockström said. But roughly half of those emissions are taken up and stored by the oceans, trees and soil, he said.

However, we are now seeing signs that we are pushing the system too far — cutting down too many trees, degrading too much soil, taking out too much fresh water and pumping too much carbon dioxide into the atmosphere, Rockström said.

Scientists fear that if we reach a certain temperature threshold, some of these natural processes will reverse and the planet "will become a self-heater,"Rockström said. That means, forests, soil and water will release the carbon they're storing.

"The moment the planet becomes a source of greenhouse gas emissions together with us humans, then as you can imagine, things are accelerating very fast in the wrong direction," he said. [Doom and Gloom: Top 10 Postapocalyptic Worlds]

In their perspective paper, Rockström and his team corroborated existing literature on various natural feedback processes and concluded that many of them can serve as "tipping elements." When one tips, many of the others follow.

Nature has feedback mechanisms, such as a rainforest's capability to create its own humidity and rain, that keep ecosystems in equilibrium. If the rainforest is subject to increasing warming and deforestation, however, the mechanism slowly gets weaker, Rockström said.

"When it crosses a tipping point, the feedback mechanism changes direction," Rockström said, and the rainforest morphs from a moisture engine into a self-dryer. Eventually, the rainforest turns into a savanna and, in the process, releases carbon, he said.

This, in turn, can become part of a cascade that would influence other processes around the world, such as ocean circulation and El Niño events. Other tipping points include the thawing of permafrost, loss of Arctic summer sea ice and the loss of coral reefs.

A global call for help

The first big goal should be to completely stop carbon emissions by 2050, Rockström said. But that won't be enough, he added.

In order to stay away from these tipping points, the "whole world [needs to] embark on a major project to become sustainable across all sectors," he said.

That could be a challenge, as countries around the world grow increasingly nationalistic, he said. Instead of focusing on narrow national goals, the world should collectively work to reduce carbon emissions — for instance by creating investment funds that can support poorer nations that don't have as much capacity to reduce emissions as richer countries do, he said.

All of this means "that it's, scientifically speaking, completely unacceptable that a country like the U.S. leaves the Paris Agreement, because now more than ever, we need every country in the world to collectively decarbonize … in order to secure a stable planet," Rockström said.

The new paper is an opinion article that includes no new research but rather draws on the existing literature, Michael Mann, a distinguished professor of meteorology at Pennsylvania State University who was not part of the study, told Live Science in an email.

"That having been said, the authors do, in my view, make a credible case that we could, in the absence of aggressive near-term efforts to reduce carbon emissions, commit to truly dangerous and irreversible climate change in a matter of decades," Mann said.