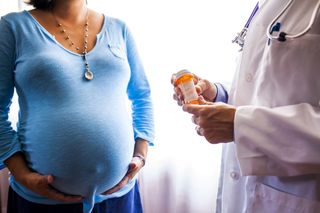 Earlier this week, a study came to a surprising and heartbreaking halt. A Dutch drug trial looking into the effects of sildenafil — the generic version of Viagra — on a rare but serious fetal-development condition was cut short after 11 infants, born to mothers who had taken the drug while pregnant, died, The Guardian reported yesterday (July 24).

But why were pregnant women given the drug to begin with?

Although using a men’s erectile-dysfunction drug for pregnancy problems may sound unusual, the odd treatment — and investigations into how it can help this particular fetal-development condition — has actually been around for years. [7 Ways Pregnant Women Affect Babies]

Viagra is in the category of medications known as vasodilators, meaning it opens up blood vessels, increasing blood flow. The effect can give men a boost when they need more blood flow to a particular area. And under the set of conditions that the Dutch research team examined, boosting a pregnant woman's blood flow to the placenta could have really helped the fetus.

The trial was focused on pregnant women with fetuses that had a condition called early-onset fetal growth restriction. Simply put, the condition basically means there isn’t enough blood flow to the placenta, said Dr. Ahmet Baschat, the director of the Johns Hopkins Center for Fetal Therapy at the Johns Hopkins University School of Medicine. This can happen either because the mother’s blood vessels aren't providing enough blood to the placenta, or because the baby’s blood vessels can't generate healthy blood flow. Either way, the result is the same: The amount of oxygen and nutrients flowing to the fetus is very low.

The condition is rare — Baschat said he estimates that between 0.5 and 0.8 percent of pregnancies are affected — but serious. "[The placenta] loses ability to work way before due date," Baschat told Live Science, and mothers often give birth early, between 24 and 32 weeks. Only about 40 to 50 percent of those babies survive. (Indeed, among the women in the trial who were in the control group — meaning they didn't get the drug — nine of the babies died.)

But, every extra day that a baby remains in a healthy womb, Baschat said, adds an extra 2 percent likelihood of survival. "Nothing beats gaining gestational age," he said. So, if sildenafil were able to open up the blood vessels connecting mother and fetus and make sure the infant stayed in the womb longer, it could ease the consequences of a condition that's otherwise untreatable.

However, increasing blood flow to the fetus isn't the only reason a pregnant woman might take sildenafil. Dr. Uri Elkayam, a professor of cardiology and obstetrics and gynecology at the Keck School of Medicine at the University of Southern California, said that he prescribes sildenafil to expectant mothers with pulmonary arterial hypertension — a condition where blood pressure in the lungs is too high. Unlike fetal growth restriction, however, this lung problem can also occur in patients who aren’t pregnant. [Viagra Goes Generic: 5 Interesting Facts About the 'Little Blue Pill']

But “recently, management [of the condition in pregnant women] has included sildenafil, and in general, it has been useful,” Elkayam told Live Science. Along with a few other medications, sildenafil has prolonged the life expectancy of mothers with this pulmonary problem, though Elkayam said he suspects that until the exact reason behind the recent deaths seen in the study is figured out, its results will drastically change how he and other doctors prescribe the drug.

Indeed, the exact reason is unclear. Baschat said that he is also curious to see what official conclusion the Dutch research team arrives at regarding the cause of these deaths. The study was part of an international investigation into how sildenafil could help with fetal growth restriction, and the prior research — also done in humans — found that the medication didn’t improve circumstances or extend how long the fetus was in the womb. That earlier research did conclude, however, that the drug was safe to give to pregnant women.

"The question I have is: If somebody does a trial and it shows a negative result, why would you then do another trial?" Baschat said. It might come to light that some other factors contributed to the surprising number of deaths in this study, but "ultimately, it’s important to share exact details — we need to know what happened," he said.