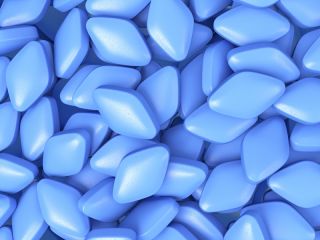 The "little blue pill" could one day have a surprising use: as a cancer prevention drug.

Early research in mice suggests that small doses of sildenafil, the ingredient in Viagra responsible for the pill's effects, may prevent colorectal cancer.

When the researchers gave the drug to mice that were prone to developing colorectal cancer, the drug was linked to a 50 percent reduction in the number of precancerous polyps that formed in the animals' intestines, compared with mice that weren't given the drug.

Still, much more work is needed before researchers will know if Viagra has the same effect in people, the study researchers said. [Viagra Goes Generic: 5 Interesting Facts About the 'Little Blue Pill']

Next steps include testing Viagra in a clinical trial of patients who have a high risk of colorectal cancer, such as people with a family history of the disease, study co-author Darren Browning, a cancer researcher at Augusta University Georgia Cancer Center, said in a statementearlier this month.

The mice used in the study had a mutation in a gene called "adenomatous polyposis coli" or APC. This mutation is also found in humans and results in the formation of hundreds of polyps starting in the teenage years, and these growths lead to colorectal cancer, Browning said. (Polyps do not always turn cancerous, however.)

The new study used the equivalent of a low dose of Viagra, a dose which is not known to have side effects in people, Browning said.

Exactly how sildenafil could prevent colorectal cancer is not clear, the researchers said. But the drug appears to increase levels of a chemical called GMP, which is known to affect the intestinal lining, the researchers said. Increased cyclic GMP may suppress some of the excessive cell growth that occurs in the gut.

The study was published in the July 2017 issue of the journal Cancer Prevention Research.