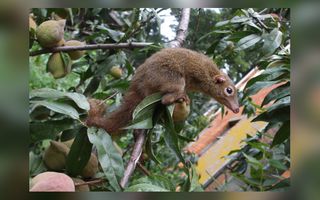 Many people in cultures around the world enjoy mouth-searingly spicy food and deliberately seek it out — a preference that was once thought to be shared by no other mammal. But scientists have discovered a primate relative that doesn't reject fiery flavors — in fact, it eats them quite eagerly.

The burning feeling that accompanies eating, or even tasting, hot peppers can be exceptionally painful. In one extreme case, after a man ate a burger topped with pureed ghost peppers — among the hottest chili peppers in the world — he retched so violently from the pain that he suffered a torn esophagus and a collapsed lung. Another hot pepper, named Dragon's Breath, which was recently developed by botanists in the U.K., is said to be so hot that eating it could lead to fatal anaphylactic shock, Live Science previously reported.

The chili peppers that the tree shrews munched on were positively mild by comparison, but they do produce a sharp, burning sensation that deters most birds and mammals. However, when scientists in China offered the shrews chili peppers, they were surprised to find that the shrews ate them enthusiastically — whether alone or mixed with other food — and with no ill effects, they wrote in the study.

Mice, on the other hand, avoided foods that had been mixed with chili peppers, the researchers noted.

The peppers don't grow in the shrews' natural habitat, and thereby aren't part of their normal diet. So what gives? Genetic analysis revealed that Chinese tree shrews possess a single mutation linked to reduced sensitivity to capsaicinoids — a group of compounds that includes capsaicin, which lends peppers their heat. This likely evolved in the shrews as an adaptation in response to a spicy plant in their native habitat called Piper boehmeriaefolium, which produces a chemical similar to capsaicin, according to the study.

For people who aren't put off by too much heat, the ability to enjoy spicy flavors enables them to sample a wider variety of dishes representing a range of cultures. Similarly, tree shrews that developed a taste for pungent plants found more meal options within their habitats — a useful adaptation for survival — compared with animals that shunned the spicy plants, the study authors reported.

The findings were published online July 12 in the journal PLOS Biology.