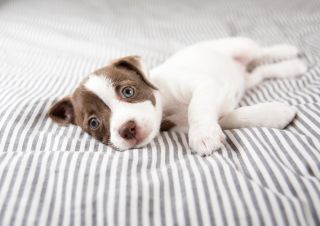 What's a surefire way to make a bad day a little bit better? Dog owners might say it's time spent with humankind's furry best friends. And according to a new study, your pet dog may be happy to help.

Previous research has shown that when humans cry, their dogs also feel distress. Now, the new study finds that dogs not only feel distress when they see that their owners are sad but will also try to do something to help.

The findings were published today (July 24) in the journal Learning and Behavior.

In the study, the researchers brought 34 pet dogs of various breeds and sizes into the lab, along with their owners. The owners were asked to sit (good human!) behind a glass door, where the dogs could see and hear them, and to say, "Help," every 15 seconds, in either a monotone or a distressed voice. [In Photos: America's Favorite Pets]

In the trials in which the pet owners were acting out a nondistressed state, they were told to hum "Twinkle, Twinkle Little Star" in between their calls for help. Meanwhile, in the trials where they acted distressed, they were told to make crying sounds in between their calls. The researchers took a video of how the dogs behaved in both scenarios and measured the dogs' heart rates for variability between beats, which could indicate stress.

What's more, the dogs were also able to get through to door to their owners: The door was held shut by three small magnets, so to open it, the dogs just had to lightly touch it, such as with their paws or noses.

The researchers found that dogs didn't open the door more often when their owners cried than when they hummed. "Dogs want to be with their owners, so even in our condition where the dogs were exposed to humming, they still about half the time went to their owners," said senior study author Julia Meyers-Manor, an assistant professor of psychology at Ripon College.

But the dogs who did open the door opened it about 40 seconds faster when their owners were crying compared with when the owners were humming, Meyers-Manor said.

In addition, by comparing the behaviors of the dogs as they saw and heard their owners cry with how they normally behaved, the researchers found that dogs who pushed through the door showed less stress than those who didn't enter the door. The researchers quantified this via the rate of "stressful behaviors" the dogs exhibited per second.

"It seems like the dogs [who didn't go through the door] would get more and more stressed by the crying but that they then sort of became paralyzed and [were] not able to do anything," Meyers-Manor told Live Science. But she noted that the scientists saw a huge range of behaviors, including other dogs who were indifferent to their owners' cries.

The researchers noted that they found some variability in the heart rate of the stressed dogs as well, but this data was a bit more difficult to interpret, as you typically need about 2 minutes of data to get a good reading, Meyers-Manor said. However, in some cases, the researchers got only around 20 seconds before the dogs opened the door, ending the trial.

Another limitation of the study could be the varying abilities of the humans to act out signs of distress, the authors wrote. In other words, some people were bad at acting.

The final part of the study was a challenge called "impossible task," which measures the strength of a dog's bond with its owner. In this task, the dogs were shown into a room where their owner and a stranger stood on opposite sides of a testing apparatus. Both the owners and the strangers stood still and stared diagonally across the room; they didn't make eye contact with the dog. The dogs were taught to move a jar on the apparatus in order to retrieve food underneath it. After a couple of trials, the jar was then screwed onto its lid, so that the dogs couldn't retrieve the food.

And why did dogs with stronger bonds more often open the door when their owners were crying and less often when they were humming? That result may be "reflective of empathy," the authors wrote.

But it's difficult to conclude that for sure, Meyers-Manor said. And as to whether dogs want to help their owners or just want to alleviate their own sadness — that remains unclear.

Previous research has shown that dogs also show distress when they hear a stranger cry or a baby cry on a recording, Meyers-Manor said. "I think that they have a general response to this crying, but I think that taking the action to do the rescue may be a little bit more dependent on [the] relationship [with their owners]," she added.

This study "helps support what many owners already feel," Meyers-Manor said, "[that] their dogs are responsive to them when they are distressed … and that they try to take action to alleviate that" distress.