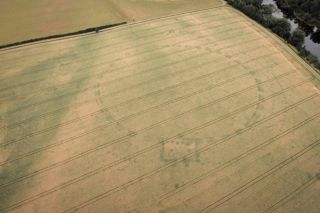 Crop marks caused by warm weather have revealed an buried henge monument in a field to the south of Newgrange.
(Image: © Anthony Murphy and Ken Williams/Ireland National Monuments Service)

A drone flyby has revealed a prehistoric henge, or circular monument, in a field next to the  5,000-year-old passage tomb at Newgrange in Ireland. The new henge is the fourth one discovered near the Newgrange tomb.

The discovery comes as archaeologists, in a separate discovery, have unearthed a mysterious prehistoric structure – thought to be a ceremonial Neolithic avenue aligned with the rising and setting of the sun at the spring and fall equinoxes.

The high ground around the Newgrange passage tomb, beside the Boyne River about 25 miles (40 kilometers) north of Dublin, is already celebrated as a Neolithic "graveyard" and ceremonial center. [See Photos of the Newgrange Tomb and Henge]

The finds reveal the importance of the area to its ancient inhabitants 5,000 years ago — more than 100 years before the Neolithic stone circle at Stonehenge in England was built, and about 400 years before the pyramids at Giza in Egypt, archeologists said.

The high ground around the Newgrange passage tomb, beside the Boyne River about 25 miles (40 kilometers) north of Dublin, is already celebrated as a Neolithic "graveyard" and ceremonial center. [25 Most Mysterious Archaeological Sites on Earth]

The finds reveal the importance of the area to its ancient inhabitants 5,000 years ago — more than 100 years before the Neolithic stone circle at Stonehenge in England was built, and about 400 years before the pyramids at Giza in Egypt, archeologists said.

The excavations at Newgrange, south of the famous Neolithic passage tomb, are being led by Geraldine Stout, an archaeologist with the Irish National Monuments Service, and her husband, Matthew Stout, a professor of history and geography at Dublin City University in Ireland.

Matthew Stout told Live Science that the latest four-week dig, funded by the Royal Irish Academy, an independent cultural institute, is the first time in more than 30 years that scientific excavations had taken place at Newgrange.

"We've been digging for two weeks now, we've bottomed out in many places, and we're pretty sure that we are dealing with a [new] Neolithic structure," Stout said. "It adds a whole other dimension to the ceremonial activity at Newgrange."

The Newgrange tomb, the centerpiece of Ireland's Brú na Bóinne World Heritage site, attracts tens of thousands of visitors each year – and in 2015, archaeologist Joanna Leigh was employed to survey the area before a planned expansion of the visitors' center.

At first, archaeologists speculated that the buried structure could be much younger than the Neolithic passage tomb: perhaps a medieval barn, or a formal avenue of trees built in the 17th century.

But no medieval pottery or evidence of a later avenue had been found in the latest excavations, Stout said, and the archaeological team now believes that the buried structure was built in the Neolithic period, at the same time or soon after the Newgrange passage tomb.

The alignment of a parallel pattern of pits at the eastern end of the structure with the south-facing entrance of the passage tomb suggested it was a cursus, or ceremonial avenue, Stout said — like those found at other Neolithic sites in Ireland and at Stonehenge in England.

The alignment of the buried pits due east and west suggests that the avenue may have been used for processions to the tomb at the spring and winter equinoxes, while the entrance of the passage tomb itself was aligned to the winter solstice sunrise, he said. [25 Grisly Archaeological Discoveries]

Meanwhile, yet another buried prehistoric monument has been revealed in a field right next to the latest excavations at Newgrange.

The circular monument or henge was found thanks to a summer heat wave across Ireland and the U.K. that has revealed buried archaeological features as "crop marks" in the surface vegetation at several prehistoric sites.

The crop marks revealing the henge were discovered by local historians Anthony Murphy and Ken Williams, who used a drone to take aerial shots of the fields around Newgrange – including the new excavations led by the Stouts.

The newly discovered henge was "a rare opportunity to uncover further secrets held in our landscape," Josepha Madigan, Ireland's culture minister, said in a statement.

Stout said the feature appeared to be a timber henge, which probably consisted of dug pits holding the trunks of trees in a large circular pattern, like the standing stones at Stonehenge.

The discovery of the henge and what appeared to be a Neolithic cursus at Newgrange showed the importance of the tomb and the surrounding area as a ceremonial center for the prehistoric peoples of the region, he said.

"It is in an area where we know of two earth henges, and where a third one has been identified by a lidar [light detection and ranging] survey … and now there's this one that's been identified as a crop mark." Stout told Live Science. "So in two fields you have four giant Neolithic or early Bronze-Age henge monuments."