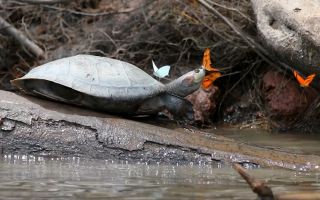 Video recently shot in the Peruvian Amazon shows an astonishing sight: colorful butterflies drinking tears directly from the eyes of turtles basking by the river.

Phil Torres, a tropical entomologist and science communicator, was traveling down Peru's Tambopata River in early March when he spied the riverside scene and captured the footage, he told Live Science in an email. Three turtles had crawled onto branches by the riverbank to soak up the sun. And around their heads fluttered several species of brilliantly colored butterflies, swooping and settling near the turtles' eyes to delicately sip the reptiles' salty tears.

In a video, Torres described the tear-drinking butterflies as "one of the most bizarre, strange, beautiful, fascinating things I have ever seen in my entire life." He posted the footage to his YouTube channel, The Jungle Diaries, where he documents his research expeditions and discoveries. [Photos: Butterflies Drink Turtle Tears]

Those butterflies, about eight species from three different families, were all after the same thing: sodium, Torres explained in the video. Butterflies can't get sodium from flowers, so the insects have to seek it elsewhere. Some species of butterfly dive into poop as their sodium source; some find it in dirt, and others — like the butterflies by the river — target tears.

The tearful reptiles, likely yellow-spotted sideneck turtles (Podocnemis unifilis), belong to a group of turtles that can't retract their heads into their shells. Their only option for discouraging the thirsty insects is turning their heads from side to side, which isn't terribly effective, Torres told Live Science.

And butterflies that drink tears can be very persistent, targeting anything lying still enough and with its eyes open, he said.

"Heck, I bet if I laid out on a log long enough, they'd definitely come feed on my sweat (this is fairly common) and maybe even have a go at my eyes," Torres said.

Usually, turtles glimpsed in the Amazon dive back into the river as soon as a boat approaches, but Torres was able to film the group for about 10 minutes — probably because they were so distracted by the butterflies treating their faces like an all-you-can-drink happy hour.

"I'd say this is about a one-in-a-thousand turtle-basking event to get this lucky and see so many butterflies all around," Torres said.

Some types of animals participate in a practice known as mutualism, a quid-pro-quo arrangement that usually involves two species trading services that benefit one another. For example, shaggy water buffalo that inhabit the wetlands of northern Turkey are often covered with tiny frogs that gobble up pesky flies on the bovines' backs. And cuckoo chicks, which are raised by other bird species, secrete a noxious chemical that keeps predators away from their foster families' nests.

However, while the Amazon butterflies are certainly getting something from the turtles, it's less clear how the turtles benefit from the arrangement, Torres told Live Science.

"They definitely don't seem to enjoy it," he said. "This is a fairly colorful example of commensalism — a species partnership where one species benefits and the other species doesn't really get affected, positively or negatively."