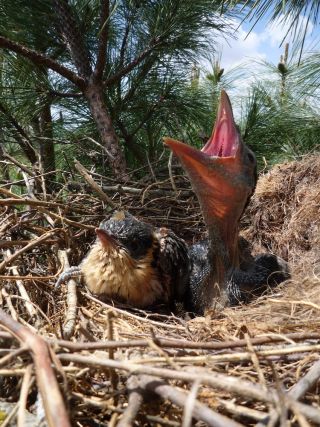 Everyone knows cuckoos are the freeloaders of the animal kingdom, laying their eggs in other birds' nests. But such slackers may not be total parasites.

A study of great spotted cuckoos and the carrion crows that raise the cuckoos' young finds that young cuckoos secrete a noxious substance that repels predators that come to attack the nest. These results suggest cuckoos and crows have a mutually beneficial relationship.

Researchers were studying carrion crows in Spain when they noticed a strange pattern. When cuckoos were present at a crow's nest, the nest had lower chances of being predated by feral cats and birds of prey. And when threatened, the baby cuckoos released a stinky secretion, which seemed to deter the predators. [Images of Great Spotted Cuckoo Invaders]

Maybe, the cuckoos were earning their keep, according to the study detailed today (March 20) in the journal Science.

"We thought it was possible this mechanism was a chemical defense of the cuckoo [that] could turn parasitism into mutualism," study researcher Vittorio Baglione, an evolutionary biologist at the University of Valladolid in Spain, told Live Science.

To test their theory, the researchers moved cuckoos that were in crow's nests to nests without cuckoos. Nests newly occupied by cuckoos had fewer predators attack them than cuckoo-free nests, suggesting the interlopers were, in fact, benefitting the crows.

Even so, all cuckoos aren't off the hook. There are two kinds of cuckoos: those that evict all the eggs and chicks from the nest of the host bird, and those that lay their eggs alongside the host bird's eggs without evicting them. The great spotted cuckoos in this study are the latter kind, while the former type will always be parasites, the researchers said.