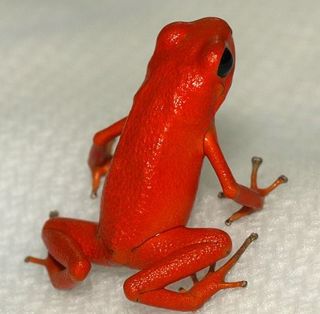 Moms -- we've all got them, and we all need them. But some animals have a slightly different idea of what it means to be a good mother. From moms who turn their bodies into food to others who encourage their young to become cannibals, here are the weirdest mothering techniques in nature.

Chicken moms take their duties very seriously. Creating an endless amount of calcium carbonate for eggshells is a difficult task, so if chickens don't get enough calcium in their diets, they'll actually dissolve their own bones to make baby-housing shells. That's one way to lose baby weight!

Cuckoos have figured out a unique way to get the neighbors to do the difficult work of raising young. Momma cuckoos will sneakily lay their eggs in another bird's nest. In doing so, the cuckoo tricks the other bird -- often a different, smaller species -- into taking on the expensive burden of raising the chick. The cuckoo chick usually hatches first, and grows faster, forcing the other chicks out of the nest, where they then die. It then gets the full attention of its adoptive parents, giving it much greater chances of survival.

The tiny endangered Madagascar-based Adetomyrmaant has a strange way to show love to its kiddos. The ants practice something known as "non-destructive cannibalism." When the colony's queen gives birth to ant larvae, she and her workers chew holes in the tiny babies to feed on their haemolymph – their circulatory system fluid (which would be blood in mammals). Scientists can't say exactly why these ants do this -- ants have a social behavior of transferring fluids to each other, so they may be practicing a rudimentary form of that behavior. The baby ants don't die, but sucking blood from the young is a weird way to show vampire affection.

Sometimes, mothers in the wild have to go to great lengths to protect their young.

Pacific gray whales migrate thousands of miles from cold, plankton-rich Arctic waters to relatively nutrient-poor tropical lagoons off of the coast of Mexico where they give birth. While the journey takes the gray whales away from a bountiful food supply, the southern neighborhood is free of the dangerous orcas (they stick to colder waters) that otherwise hunt the newborn whales. It also gives their newborns time to feed on their mothers' incredibly rich milk (53 percent fat!) and build a layer of insulating blubber before the must head to the icy Arctic. Like bears, the mother whales go hungry for months while still needing to produce high-calorie milk for their babies. During this time they may lose as much as 8 tons of weight.

For many spiders, the act of mating signals that their lives are about to end -- remember  Charlotte's Web? For several species of the Stegodyphus spiders, motherly love goes even further than watching over the nest. Females attach their egg cocoons to their webs and watch over them until the babies hatch. Once her children have hatched, the mother continues to eat, but regurgitates most of her meals as a nutrient soup for her offspring while the spiderlings stay in their mother's web.

When the babies are around a month old, the mother spider rolls over on her back allowing the spiderlings to clamber over her, kill her by injecting their venom and digestive enzymes into her body, and eat her. After the young gobble her up, they turn on each other and cannibalize as many of their siblings as they can before leaving their mother's web. Thanksgiving dinners are probably pretty awkward after that kind of upbringing.

Talk about a painful pregnancy. The small fish-clinging female sea louse has to deal with males that impregnate up to 25 females at one time. The worst part? By the time she is ready to give birth to hundreds of baby lice, she sits back and the babies chew through her insides to emerge into the world.

The teensy female poison arrow frog literally goes above and beyond when taking on the duties of motherhood. After laying as many as five eggs and watching them hatch, the strawberry poison arrow frog carries her tadpoles, one by one, on her back, from the rain forest floor up into trees as high as 100 feet. After hoisting her babes to the treetops, the frog then finds individual pools of water in leaves for each tadpole, setting up safe and individualized nurseries. That's not the end of her super-mom duties. The mother strawberry poison arrow frog then feeds each of her young with her own unfertilized eggs over the course of six to eight weeks, thus allowing these tadpoles to grow into young frogs without having to eat each other. What, eggs again?