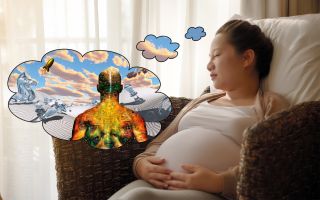 The anxiety and physical discomforts of pregnancy can play out in dreams — or nightmares.
(Image: © Shutterstock)

The fractured logic and mystifying images that appear in dreams can be downright bizarre for anyone. But one of the hallmarks of pregnancy seems to be the onset of dreams that are unnervingly intense or that seem stranger than usual.

Back in May, pop singer Cardi B, who welcomed her first baby last Tuesday (July 10) — tweeted about experiencing "weird, crazy, spooky dreams," writing in a second tweet that all of her dreams were "too vivid." And she's not alone. Studies have found that pregnant women reported more nightmares and more intense dreams than nonpregnant women, and that women in the last trimester of their pregnancies described more frequent nightmares during that stage than during the earlier trimesters.

What is it about pregnancy that causes troubled dreaming? Turns out, it has to do with troubled sleeping. [7 Mind-Bending Facts About Dreams]

Bring me a dream

The human sleep cycle has five stages, one of which — rapid eye movement, or REM — makes up about 25 percent of sleeping and is the stage when most dreaming occurs, according to the National Institutes of Health. When you fall asleep, you enter the first REM stage after about 70 to 90 minutes, and REM sleep occurs several times during the night as your sleep cycle repeats.

As you dream, your brain is actively sorting through recent experiences and emotions, and dreaming is thought to play a role in memory consolidation and processing new information, Dr. Ryan Donald, a physician and assistant professor of sleep medicine at The Ohio State University Wexner Medical Center, told Live Science.

But if a person's sleep cycle is broken and they wake up during a REM stage, they would be more likely to vividly recall what they're dreaming — and pregnant women often experience disturbed sleep at different pregnancy stages, according to Dr. Julie Levitt, an OB-GYN and clinical instructor at Northwestern Medicine in Chicago.

"Rising progesterone levels in the first trimester can trigger insomnia — that's fairly common," Levitt told Live Science. That usually abates at 12 to 16 weeks into the pregnancy, but the onset of the third trimester, about 28 weeks and beyond, brings increasing physical discomfort that can disrupt nighttime rest, she explained.

"Quality of sleep is the poorest right before you're about to deliver the baby," Levitt said. "You have to get up to pee at night, or you might snore, or have sleep apnea." (People with sleep apnea experience very shallow breathing or pauses in breathing while they're asleep.)

Restless legs syndrome, a disorder that causes an intense urge to move the legs, can also manifest during pregnancy and interrupt much-needed sleep, Donald added. Frequent sleep disruption increases the likelihood of waking up during the REM stage of the sleep cycle, which makes dreams seem more immediate, intense and memorable, Donald said.

"Lower sleep quality, shorter sleep duration, more interruptions during sleep: These all can increase the likelihood of remembering dreams," he said. [Is 'Pregnancy Brain' Real?]

A dream to some, a nightmare to others

Pregnant women also report more frequent nightmares, many of which have to do with childbirth or danger to the newborn baby, according to a study published in November 2016 in the journal BMC Pregnancy and Childbirth. Researchers surveyed 406 pregnant women, ages 17 to 44, and found that they reported nightmares more than twice as often as women who were not pregnant, and that those nightmares were often baby-related.

Pregnancy, particularly the third trimester, is a period of heightened stress; perhaps increased daytime stress for pregnant women could explain why nightmares are more frequent during pregnancy, the scientists wrote.

Another study, published in June 2014 in the journal Sleep Medicine, surveyed 57 pregnant women who were in the last trimester of their pregnancies; 32 percent described having weekly nightmares, and 21 percent reported more than one nightmare per week.

Levitt experienced nightmarish dreaming firsthand during her own pregnancy, when she dreamed that she gave birth to a litter of puppies, she told Live Science.

"You have these dreams, and you're like, 'What in the world? Where did that come from?'" Levitt said. "I think it's based on things people might worry about on a day-to-day basis. A lot of the daytime fears that we walk around with tend to reveal themselves in dreams at night."