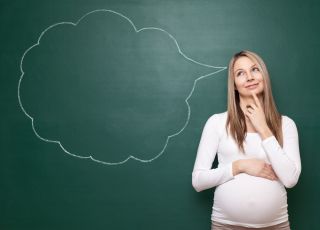 If you've ever found yourself at a real loss for words while pregnant, or you feel like you just keep forgetting to book appointments during those nine months of expecting, you're not the only one. Surveys have found that about 64 percent of expecting mothers report struggling more to find the right words or focus on the tasks at hand than before they were pregnant.

But why is that the case? Is there a real biological explanation for what's been nicknamed "pregnancy brain"? Or is the phenomenon as vague and mysterious as that phone number you could have sworn you had memorized?

Though pregnant women may notice changes in their memory, there's a host of other behavioral adaptions going on that may not be as obvious, such as increased awareness of potential threats. Indeed, pregnancy (and early postpartum) causes huge changes in a mother’s brain. "It is the time in your life [that your brain] is most plastic during adulthood," said Jodi Pawluski, a research associate who studies maternal mental health at the University of Rennes 1 in France. [10 Things You Didn't Know About You]

Raising a child and being attuned to their needs requires a parent's brain to forge new neurological connections that support these unfamiliar responsibilities, Pawluski told Live Science. Those changes stick around, too — a 2016 study published in the journal Nature used MRI scans to show that a specific pattern of gray matter, or brain cells, changes in pregnant women and that those alterations last at least two years after they give birth.

As for the specific, neurological link between pregnancy and memory, Pawluski said she hasn't seen any research investigating whether changes in the maternal brain contribute to forgetfulness.

There have been some studies, however, that have assessed the memory skills of pregnant women. In 2008, research out of Australia found that pregnant women performed just as well on memory tasks in the lab as nonpregnant women did, but the pregnant women didn't do as well on similar tasks at home. As the researchers told The Guardian that year, these results made the team think that some of a mother’s forgetfulness could be due to the drastic schedule and life adjustments pregnancy creates.

To Marci Lobel, a psychologist who focuses on pregnancy at Stony Brook University in New York, these social explanations for "pregnancy brain" make sense.

"I'm always wary about pathologizing women's health experiences, and attributing weaknesses (such as 'forgetting') to pregnancy itself when in all likelihood, they're attributable to the social, financial, relationship and other strains that pregnant women may be experiencing," Lobel told Live Science in an email. Some women mention these and other stressors, such as adjusting to an unintended pregnancy or anxiety over single parenthood, as contributing to symptoms of depression, which affect about 25 percent of expecting mothers.

Clearly, there are many possible concerns that can crowd out a woman's brain during pregnancy, and these thoughts may make it difficult to remember certain things. And if there is a neurological explanation, it might simply be part of the way the body reallocates some resources to the development of parenting skills — shifts that are part of a normal, healthy pregnancy, Pawluski said.

What's important, she added, is that even if there's not a strong scientific explanation for why your brain feels foggier, that doesn't mean your experience isn't valid or real. "If you think you're forgetting a lot, but I tell you you're not, that can cause a lot of anxiety," Pawluski said.

So, go ahead — acknowledge that you might need a little more help remembering appointments and other things while you're expecting. No one will blame you for carrying around an extra notepad.