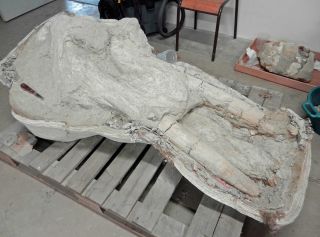 A farmer found a rare mastodon skull on his property.
(Image: © Museum Toulouse)

A French farmer received the surprise of a lifetime when he stumbled upon the enormous skull of a long-extinct Pyrenean mastodon, but he kept it to himself for years, the AFP reported on Thursday (July 12).

The small-town farmer, who lives in L'Isle-en-Dodon, France, knew the skull was remarkable and rare, but didn't want people to know it was on his land. He valued his privacy and feared that his farm would be overrun by "hordes of amateur paleontologists," the AFP reported.

Fortunately for scientists, the reluctant farmer changed his mind. Two years after finding the fossil, he contacted the Natural History Museum of Toulouse, in France, about his extraordinary find. "It was only when we went there, in 2017, that we realized the significance of the discovery," the museum's management told AFP. [Mastodon Bones: Images of an Early Hunt]

Experts identified the skull as Gomphotherium pyrenaicum, a large mastodon that roamed the Pyrenees mountain region between about 11 million and 13 million years ago, reported ScienceAlert. This large herbivore had a body shape similar to modern elephants but had four tusks instead of two: two coming from the bottom jaw and two from the top.

Until now, the only other evidence of this long-extinct species was a few fossil teeth found in the same region in 1857. The farmer's discovery of this skull is a major scientific contribution, and museum paleontologists were glad he decided to come forward, ScienceAlert reported.

"We're putting a face on a species which had become almost mythical," the museum's curator Pierre Dalous, told AFP.

Museum paleontologists removed the fossil from the farmer's land and brought it to their lab, where they're carefully removing the sediment encasing the skull. So far, no other mastodon bones have been found on the farmer's property. And, there are no reports on whether or not the farmer's property has been overrun by fossil hunters just yet.