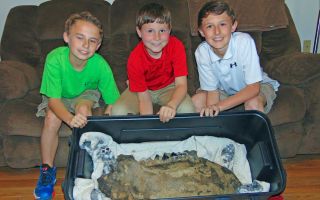 Shawn Sellers, left, Michael Mahalitc and Caid Sellers, display the lower left jawbone of a mastodon they found in a plowed up area of their family's property in the Bovina area in Vicksburg, Miss.
(Image: © John Surratt/The Vicksburg Post/AP)

Three boys in Bovina, Mississippi, are having a very cool spring break after finding a mastodon jawbone in some recently plowed dirt.

Brothers Shawn and Caid Sellers and their cousin Michael Mahalitc were walking around the Sellers' family property, The Vicksburg Post reported, when they stumbled on the fossil. The jawbone came from a "very mature individual," according to George Phillips, the curator of paleontology at the Mississippi Museum of Natural Science, who examined the bone and spoke to The Vicksburg Post. The boys told The Vicksburg Post that they struggled to lift the bone, which in a photo fills a tub that looks big enough to wash a large dog.

Mastodons, as Live Science has reported, were prehistoric mammals with giant tusks and trunks related to but distinct from both woolly mammoths and modern elephants. They first appeared between 27 million and 30 million years ago, primarily in North and Central America, and went extinct around 10,000 years ago, likely thanks to climate change and/or human hunting. (Woolly mammoths, in contrast, appeared about 5.1 million years ago.) [Photos: These Animals Used to Be Giants]

Like their bigger woolly cousins, mastodons were covered in hair and grew long tusks, up to 8 feet (2.5 m) long, though they didn't curve as dramatically as mammoths'. Female mastodons did not have tusks.

It's apparently not wildly uncommon to find mastodon bones in Mississippi, according to The Vicksburg Post. Phillips told The Post that the jawbone was the third mastodon he'd examined in the last month.