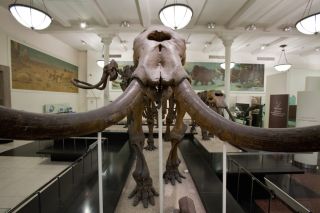 Mastodons were prehistoric relatives of today's elephants. Like their modern cousins, mastodons had tusks, flappy ears and a long nose. Both animals, as well as the woolly mammoth, are members of the order Proboscidea, a name that comes from the Greek word proboskis, which means nose.

The difference between mastodons and mammoths

Mastodons and woolly mammoths both look like ancient elephants, but they are separate species. One big difference between them is when they appeared on Earth. Mammoths appeared about 5.1 million years ago in Africa, according to Ross MacPhee, a curator at the American Museum of Natural History in New York. Mastodons, on the other hand, appeared about 27 million to 30 million years ago, primarily in North and Central America. [Related: Mammoth or Mastodon: What's the Difference?]

There are several other differences. Mastodons were slightly smaller than mammoths. Though they are both herbivores, they ate differently. Mastodons had blunt, cone-shaped molars that would crush vegetation, while mammoths had ridged molars that cut plants, much like today's elephants. Naturalist Georges Cuvier named them "mastodon" because of their breast-like tooth protrusions, according to Wired.

Unlike modern elephants, mastodons had much smaller ears and foreheads and were covered in a thick layer of brown hair. Hairs on their coats, could grow up to 35 inches (90 centimeters) and the males' tusks grew to about 8 feet (2.5 meters). Females did not have tusks.

Though mastodons appeared primarily in North and Central America, they eventually spread all over the world, in every continent except for Antarctica and Australia. They typically inhabited spruce woodlands around valleys and swamps, according to Cochise College.

Mastodons went extinct around 10,000 years ago. There are many theories as to why. Most of these theories boil down to climate change and/or human hunting, according to Simon Fraser University. Some scientists think that the Earth warmed up from the Ice Age too quickly for the mastodon to adapt or that humans hunted them to extinction.

Others, like researchers Bruce Rothschild of the Northeastern Ohio Universities College of Medicine and Richard Laub of the Buffalo Museum of Science in New York, have a different theory. They found that 52 percent of the 113 mastodons they studied had signs of tuberculosis. This led the researchers to think that a tuberculosis pandemic contributed to their extinction. Though death by disease sounds like a cut-and-dry answer, "Extinction is usually not a one-phenomenon event," Rothschild told Live Science. It is likely that the disease didn't kill off the animals directly, but made them weak. Coupled with the coming out of the Ice Age and fighting off humans, the species just couldn't survive.

The first mastodon fossils were found in 1705, according to the Oregon History Project, when a large tooth and bone fragments were found in the Hudson River Valley in New York. Not long after, in 1807, Thomas Jefferson personally financed an expedition that was by led William Clark to excavate mastodon and mammoth fossils from the Big Bone Lick site in Kentucky.

There have been many mastodon fossil discoveries in the past few hundred years. Sometimes, they are found in unusual places. For example, on October 16, 1963, Marshal Erb was using a dragline to excavate a pond and found fossils that came to be known as the Perry Mastodon. In another instance in 2016, a sinkhole in Florida’s Aucilla River was declared an "archaeological gold mine" after an ancient human tool and mastodon bones are found inside.