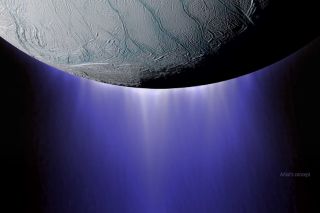 Two weeks before Cassini, a robot probe, destroyed itself in a controlled dive into Saturn's whirling atmosphere, it heard the gas giant sing to its weirdest moon.

When Cassini passed between Saturn and its sixth-largest moon, Enceladus, it recorded for the first time a vibrating column of plasma passing from the gas giant to the little icy world. Those plasma oscillations looked a lot like the vibrations in the air we hear as sound, so researchers converted the plasma record into a sound file, making a listenable version of Saturn's song.

That recording was published Saturday (July 7) along with a paper in the journal Geophysical Research Letters. Researchers already knew from earlier Cassini observations that Enceladus heavily plucked the magnetic fields around Saturn with its own magnetism and spurting vapors, they wrote. Enceladus, under its frozen crust, hides a mysterious warm ocean that sometimes vomits up clouds of vapor and organic molecules into the space around Saturn, which (in addition to being a tantalizing hint of conditions that could give rise to life) mess with the electrical energies around the ringed planet.

This Cassini observation, conducted during the last stages of the probe's "Grande Finale," is the first recording showing that when Enceladus sends its humming pulses of energy into Saturn's ionosphere, its massive parent planet sings back.

Researchers call that song an "auroral hiss," since it's made up of the same stuff (plasma) that people sometimes see as auroras above Earth. Plasma, a highly electrically-conductive state of matter that's similar in some ways to gas, can carry waves inside it. And it was those waves in the column of plasma reaching from Saturn to Enceladus that you can hear in the video above.

If you passed between Saturn and Enceladus though, you wouldn't hear that high, spooky keening. The waves aren't audible. To hear them, researchers converted their waveforms into sound, in a process similar to how your car radio converts electromagnetic waves into sound, the researchers said in a statement. The researchers then sped the recording up from the 16 minutes of plasma recordings Cassini made on Sept. 2, 2017, to a quick, audible 28.5 seconds. [Moon Birth and Methane Weather: Cassini's 7 Oddest Saturn Finds]

This recording also illustrates a big difference between the distant gas giant and our planet, the researchers wrote. Whereas Saturn interacts energetically with its dynamic close-orbiting moon and even its rings, Earth has no such similar plasma song for its own moon. Our moon is just too stable, and too far outside Earth's ionosphere for the two bodies to get lost in cosmic song.