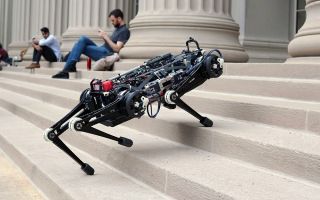 Cheetah 3 can leap onto tables and navigate around obstacles while "blind," and that's not at all terrifying.
(Image: © MIT)

Engineers and roboticists at MIT are clearly doing everything in their power to ease our transition into a full-on robot takeover.

Their latest achievement in "blind locomotion" — robots that can navigate without the benefit of vision sensors — is the 90-lb. (41 kilograms) Cheetah 3. This four-limbed mechanical beast can stomp its way up debris-littered stairs, sprint over uneven terrain, and recover after being pummeled or pushed.

By designing the robot to "feel" its footing, much like a blindfolded person would do, the researchers from the Massachusetts Institute of Technology hoped to produce a machine that could respond more quickly to unexpected obstacles than if it relied on sight, Sangbae Kim, the robot's designer and an associate professor of mechanical engineering at MIT, said in a statement. [Robots on the Run! 5 Bots That Can Really Move]

"Vision can be 'noisy,' slightly inaccurate and sometimes not available, and if you rely too much on vision, your robot has to be very accurate in position and eventually will be slow," Kim said. "What if it steps on something that a camera can't see? What will it do? That's where blind locomotion can help. We don't want to trust our vision too much."

Like its big cat namesake, the robot can bend and flex its body and legs from side to side — almost as if it were getting ready to leap at unsuspecting prey.

Multiple sensors gather data with every step the robot takes; special algorithms evaluate the data from limb movements to help Cheetah 3 figure out where to place each foot and how to recover when it encounters an unexpected stumbling block, such as a rock or twig, according to the MIT statement. These calculations enable the robot to decide when it's safe to "commit" its footstep and move forward and when it's more prudent to pull back.

As unsettling as Cheetah 3's animal-like and headless body may look, its purpose is helpful: performing simple tasks across highly variable terrain under conditions that could be too risky for people, Kim said in the statement.

"Dangerous, dirty and difficult work can be done much more safely through remotely controlled robots," he said.

Cheetah 3 will demonstrate its blind locomotion prowess — along with its other robotic superpowers — at the International Conference on Intelligent Robots, held Oct. 1-5 in Madrid, MIT said.