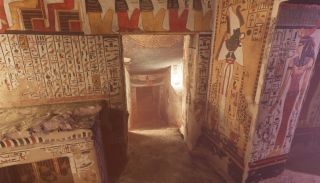 Some of the VR tour of Nefertari's tomb is shown here.
(Image: © Curiosity Stream)

A new virtual reality experience may help save an ancient Egyptian tomb built for Queen Nefertari whose paintings are so beautiful that it has been compared to Italy's Sistine Chapel.

Built around 3,250 years ago for the favorite wife of pharaoh Ramesses II (who reigned from 1279 B.C. to 1213 B.C.), the Tomb of Nefertari is located in the Valley of the Queens, near Luxor. The tomb is open to just small groups of visitors, because the increase in humidity that comes when people enter can damage its paintings.

At present small groups of tourists are allowed into the tomb, each tourist paying an entrance fee of 1000 Egyptian pounds (about $56) said Zahi Hawass, an archaeologist and former Minister of State for Antiquities. [In Photos: The Mummy of Queen Nefertari of Egypt]

Between 1986 and 1992 the Getty Institute, working with Egypt's Supreme Council for Antiquities, restored the tomb, which has suffered damage from salt incrustations, bacteria and fungi. Rising humidity can lead to increases in bacteria and fungi, researchers have found. "When I started the project with the Getty, we all agreed that we cannot open the tomb to the public. But we can open it to groups who would pay a high fee," Hawass told Live Science, adding that each person pays 1,000 Egyptian pounds (about $56) to enter.

"A virtual tour will save the tomb," Hawass said.

To create the virtual reality experience, Experius VR teamed up with Curiosity Stream, a streaming service for documentaries.

Three people from Experius VR spent two days in the Nefertari tomb, 3D-scanning it and taking thousands of overlapping high-resolution images, said Elliott Mizroch, the CEO and co-founder of ExperiusVR. The team then spent two months in post-production, turning the 3D scan and photographs into a virtual reality experience.

The finished tour can now be downloaded for free on Steam and on Viveport and Curiosity Stream VR although currently you need the Vive headset to view it, said Emma Tiernon, a spokesperson for Curiosity Stream, adding that the team hopes to configure the tour so that it can be viewed on other headsets.

In this VR tour, the viewer moves around the tomb by wearing the 3D headset and using controls. If the viewer wants more information on a work of art, for instance, they can virtually touch the painting and a narrator will provide information.

Nefertari's tomb is one of a growing number of historical sites that are being saved in the virtual world. In April, Google announced it was partnering with a company called Cyark to scan historical monuments.

While the virtual reality tour of Nefertari's tomb shows the tomb as it appears today, some try to recreate a site as it looked thousands of years ago, such as a virtual tour of ancient Jerusalem released in 2017 by a company called Lithodomos VR.

While it still takes a lot of time to create a vivid virtual reality tour of an historical site — the tour of Nefertari's tomb took two months — the process is expected to become faster as virtual reality and holography technologies improve, Tiernon said, adding that Curiosity Stream plans to help create more virtual tours of historical sites.

"As virtual reality continues to improve and become more readily available, these tools will have the power to transcend today's production capabilities and transport audiences to places that we once thought unimaginable," said Jorge Franzini, executive producer of Curiosity Stream.