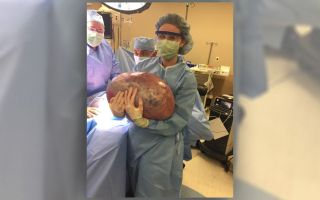 A woman in Alabama who couldn't seem to lose weight turned out to have a massive tumor on her ovary, according to news reports.

The 30-year-old woman, Kayla Rahn, had experienced stomach pain and weight gain for months, and even had trouble with everyday activities like walking, according to local news outlet WSFA. "I couldn't even walk to my car without losing my breath," Rahn told WSFA.

Doctors told Rahn she simply needed to lose weight, but despite her weight-loss efforts, she continued to put on pounds.

Rahn's pain got so bad, she ended up in the emergency room, where doctors finally identified the problem: a 50-lb. (23 kilograms) mass on one of her ovaries. [27 Oddest Medical Cases]

These tumors are filled with a thick, gelatinous fluid. They can become quite large, with some reported to weigh more than 300 lbs. (136 kg), according to the reference book "Clinical Gynecologic Oncology, Eighth Edition." Just last month, doctors removed a similar 132-lb. (60 kg) ovarian tumor from a woman in Connecticut, Live Science previously reported.

Most often, these tumors occur in women ages 20 to 40, but cases have also been reported in teens and postmenopausal women, according to a 2014 review article.

Rahn's physician, Dr. Gregory Jones, an obstetrician/gynecologist at Jackson Hospital in Montgomery, Alabama, said he has seen cases of mucinous cystadenoma before, but he was surprised by the size of Rahn's tumor. "This is one of the largest I have ever seen or certainly removed," Jones told WSFA.

Rahn underwent surgery to remove the tumor last month, and she is now recovering. She's now able to wear clothes that she couldn't fit into before. "This dress I have on, I actually have not been able to wear in a year," Rahn said.